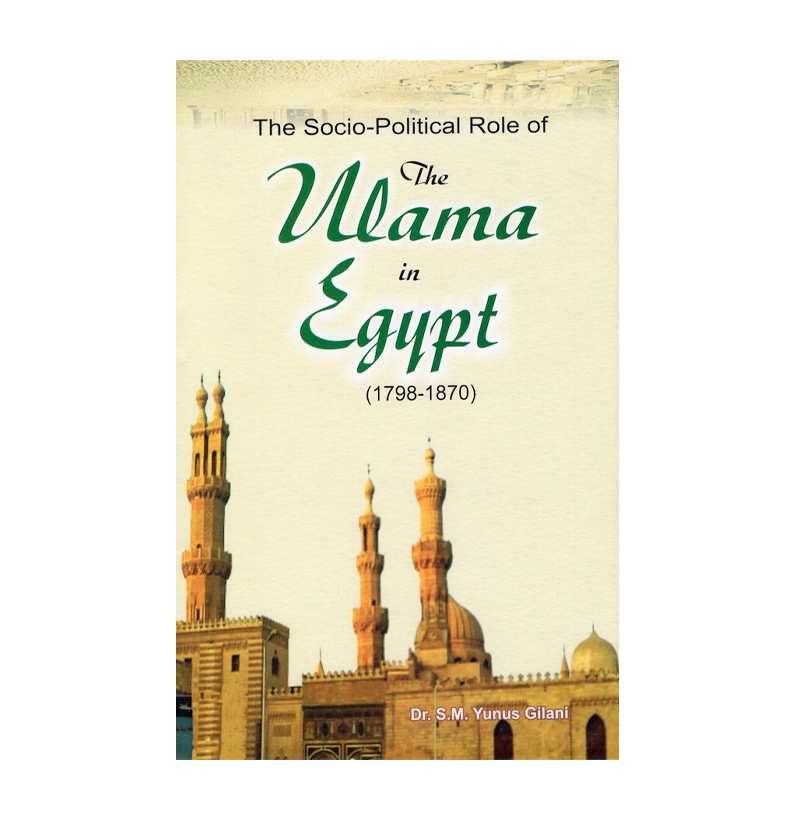 Abu al-Darda’ (Allah be pleased with him) reported that the Messenger of Allah (Allah bless him and give him peace) said: “Scholars are the inheritors of the prophets.”

After Islam entered Egypt under the leadership of the noble companion Amr ibn Al-As in the year 640 AD, Egypt soon became Umm Al-Dunya and rightfully so, Islam lit the candles of institution and learning, which was matched by none. It was the  beacon of scholarship and achievement. Many religious and political leaders were either born or worked from Egypt, including the likes of Imaam Ash-Shafi, Ibn Hajar Al-Asqalani, At-Tahawi, Salahuddin Al-Ayyubi and, more recently, Shaykh Rashid Rida and Shaykh Hasan Al-Banna, founder of the al-Ikhwān al-Muslimīn movement.

However, the glory days of Egypt was declining and finally hit the bottom when Napoleon Bonaparte (1769-1821) entered Egypt in the year 1798.  This book is a study of the socio-political role of the Ulama in Egypt between the years 1798 to 1870. The book is based partly on the author’s M. Phil and Ph.D. with an added chapter from Jeffrey C. Burke to complete the study. The book is divided into six chapters with a conclusion.

As the title suggests the main aim of the book is to study the socio-political role of the Ulama. The period under study, Egypt suffered a big blow to its traditions and its socio-political space. The oppression of the Mamluk, then Napoleon and finally Muhammad Ali Pasha (1769-1849) created a major challenge for the Ulama.  The study suggests that in those three periods, the Ulama formed the reference point of the masses; it was their role to channel and analyse those challenges and create harmonious space between the divine laws and that of the social changes which were taking place.

One cannot study the role of the Ulama without studying the socio-political importance of Jami’ah Al-Azhar. Founded in 970 AD or 972 AD by the Fatimid Caliphate, it soon became a Sunni centre of learning after the great Sunni ruler Salahuddin defeated the Fatimids. It was Azhar which became the hub for the Ulama to plan and organise all activities which serviced the needs of the people. Almost all the Ulama who have contributed toward any notable reform were from Azhar. Azhar played the role of (2007.pp 8) “…preserving the classical traditions and Arab-Islamic, culture against the attacks, penetration, pollution and aggression in cultural, educational and socio-political fields.”

The importance of Azhar extended to the influences of the Ulama. The Mamluk fully understood the importance of Azhar and the Ulama, who held positions such as Qadis and Muftis. Thus, the entire major law-making was handed to them, who ruled the country according to Islamic laws. In fact, the Ulama (2007.pp17) “…were the true leaders and spokesmen of the masses. They championed the right of the exploited particularly the artisans and even the Mamluk were obliged to listen to them.”  Throughout the Islamic history of Egypt (2007.pp21) “Al-Azhar continued to be inseparable from its sons, the Ulama”. It was completely separate from the ruling class and had great influence over the masses until Muhammad Ali Pasha came to power, who at the peak of his power realised the importance of controlling the Ulama and Azhar, and so Azhar and its sons soon became a department of the government.

The people of Egypt were (2007.pp29) “…exploited and abandoned to abject poverty under the merciless rule of the Mamluk who themselves enjoyed the highest luxury then conceivable”. Al-Jabarti (1754-1825), the famous Egyptian historian, notes the “Ulama were involved in negotiation…” between different factions of the societies and their word was considered final. They (2007.pp30) “were not merely religious functionaries but socio-political activists and leaders as well….” Whenever there was an uprising against the Mamluk by the masses, the ruling class would seek the advice and guidance of the Ulama to control the popular uprising.

The Ulama had the financial support of the people and controlled the traditional Waqfs system. With a public and private donation, they controlled Egypt’s educational system and funded all institutions which gave the populations access to most of the public services (Gilani 2007).  Although the Mamluk were the class of evil rulers, they never interfered with the Ulama and their system of distributing the Waqfs funds, which would not be taxed or confiscated. In fact, the socio-political position of the Ulama was such that the (2007.pp32) “authorities at the port granted public funds to the Ulama….”

A large part of the study deals with Napoleon’s invasion of Egypt and how he attempted to use the Ulama as his representative and influence the people to believe that he only intends good for Egypt and its people. Napoleon considered Egypt as “the most important country in the world” so he entered Egypt with the cover of being a Muslim. However, it was the Ulama who first understood Napoleon’s true intention but by this time Egypt had lost its military power so any resistance to the mighty armies of Napoleon was fruitless. But the resistance in the heart of the Ulama was fully alive. And they worked tirelessly to remove the infidels from ruling the land of the Muslims.

Napoleon, who (2007.pp39) “understood well that the ‘ulema’ were too… influential and therefore, he sought their support”, gathered the Ulama and offered many positions to them, which they had no choice but to accept it and work within the system to keep alive the spirit of Islam in the lives of the masses.

Despite the so-call Muslim face of Napoleon, the Ulama called on the Muslims of Cairo to overthrow Napoleon and his force (2007. Gilani), Although this uprising failed, it showed that the masses were under the command of the Ulama and it did not kill the spirit of the Ulama and they were able to (2007.pp75) “carefully …organise their people in somewhat systematic fashion…”

Muhammad Ali Pasha came to power, also seeking aid from the Ulama. It was the Ulama who wrote the Ottoman to put Muhammad Ali as the leader of Egypt. The study notes that there were two main reasons Ali enjoyed the Ulama’ support, firstly Ali presented himself as an ambassador of Islam and secondly, Ali was a Muslim and Muslim ruler is more accepted in the eyes of the Ulama then a non-believer. (2007.Gilani). However when Muhammad turned out to be a devil among man, it was the Ulama who (2007.pp.103) “looked [Muhammad Ali Pasha]…with suspicion for he had failed to fulfil the ambition of the Egyptian Ulama for he remain an alien autocrat…” the intention of the Ulama was to rule the country under Islamic laws, however (2007.pp.103) “Muhammad Ali turned more and more to foreigners…”.

Muhammad Ali did something which was never done before him and (2007.pp.103) “…set to neutralize their influence by confiscating the awqaf by directly interfering in the affairs of Al-Azhar…”. Many of the notable Ulama were either put under house arrest or exiled. Muhammad Ali wanted to create a class of Ulama according to his taste so he sent many young students who were not well trained in Islamic culture and tradition abroad, especially to France to learn the western method of education and social atmosphere. One such student was the famous Rifa’a Al-Tahtawi (1801-1873), the author of the famous travel log Takhlis al-Ibriz fi Talkhis Bariz. Although he was someone who appreciated Islamic traditions, his young age and his revisionist ideas helped Muhammad Ali rather than Islam.

At the end of Muhammad Ali’s career, Egypt once again was in the hands of the west and, although not directly, Muhammad Ali remodelled Egypt to the point where the natives felt like outsiders and the westerners felt at home.  Indeed, (2007.pp110) “the Western imperial powers glorified and praised Muhammad Ali as far as he was the master of Egypt and Egypt was falling more and more into the hands of foreigners..”. By this time there developed two groups of Ulama, the group that represented the masses and the group that represented the government and Al-Azhar when on the payroll of the government.

The study further develops to present the role of the Ulama in the post-Muhammad Ali era and discusses important trade institutions such as the Egyptian Bank and the opening of the Suez Canal, which undoubtedly benefited the west. The book notes that there were notable Ulama belonging to different schools, who played a major role in defending Islam and the people of Egypt against the foreigners, the most notable being Sayyid Umar Makram (1750-1822) and Al-Sharqawi (d.1812). It was Ulama like them who kept Islam alive and the masses desiring toward an Islamic Egypt.