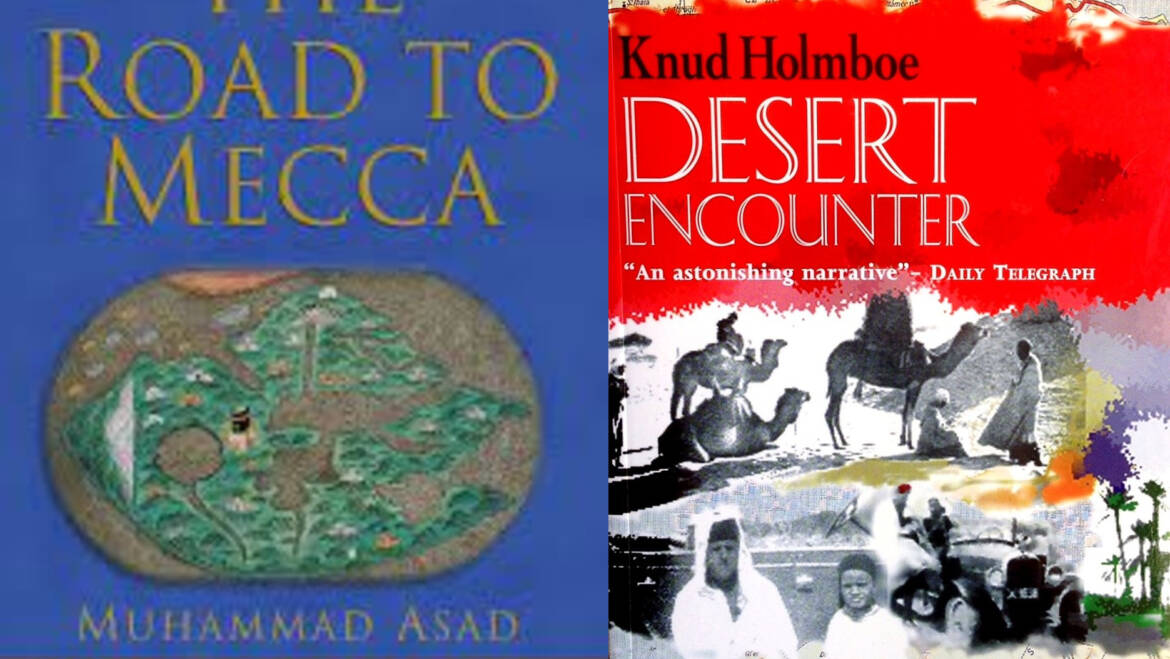 In the name of Allah, the Most Gracious, the Most Merciful

The modern interaction between the West and the East took place when Napoleon Bonaparte (1769-1821) invaded Egypt in 1798. This invasion opened doors for other European nations to explore the East. Within a few decades, the Islamic world, except for a few areas, became the territory of the Europeans. The Europeans had rediscovered the East after being previously kicked out by the great Muslim leader, Salah-Din al-Ayyub (1137-1193).

The East is considered by many as something exotic and as professor Mohammad Marandi from the university of Tehran puts it: “vague and mysterious”. Orientalist scholars have inflamed the hearts of many passionate and ambitious young European men through their writing, art, and popular narrative of the East, and as a result, traveling to the East was once something fashionable.

Road to Mecca, by Muhammad Asad, (1900-1992) and Desert Encounter, by Knud Valdemar Gylding Holmboe, (1902-1931) are the works of two passionate and ambitious young Europeans who traveled across the Muslim world. Both converts to Islam, as well as established authors, record their journey in detail and described the people, landscape, and political atmosphere through their journey.
Asad’s journey started as an unsatisfied young Jewish man, who needed to escape from the world he knew to the world of the unknown, and in some sense to the unknown spiritual order; however, this spiritual order was, as he puts it

He was very much dissatisfied with what his environment and his civilization had to offer. His religious tradition played a part, although not directly, in pushing him out of his native land; he notes

“despite all this budding religious wisdom, or maybe because of it, I soon developed a supercilious feeling toward many of the premises of Jewish faith”.

His haughty look upon Jewish beliefs was eventually replaced with a new spiritual order, taking shape in the form of Islam – something he mentions numerous times in the book.
On the other hand, Holmboe’s journey was well planned and had a clear aim. He was already a member of the Muslim community before sailing to Africa, converting to Islam after visiting the Balkans; in his words, this is

“where his love affair with Islam had begun”.

Holmboe had a clear plan to become the

“first man in the world to have driven through Africa from east to west. [Due to him being] “Interested in the Arabs’ culture and way of thinking”.

The two journeys shared the same landscape, same people, and the same culture; however, their expeditions differed radically in their aims, space, and worldview. Asad’s journey is more exciting and more adventurous, precisely because he really could not offer us a clear picture of his worldview or even where he wanted to go. His journeys are mere chances of events, which maps out for him his routes. Asad did not embark on the journey with any knowledge of the language or its people; however, he quickly discovered the traditions and language of the people, who later became his brethren in faith, when talking about the poor Muslims of Palestine his voice echoed with admiration he says:

I cannot but admire the nobility and ease of their bearing and their inner quiet […] although his journey was not a “deliberate search for faith […] rather faith came upon [him].

On the contrary, Holmboe’s journey was purposely mapped out, although not the route he took, the idea of him traveling through a continent was planned. He knew about Islam, the language of the Muslims and more so he was already a member of the Ummah. There was no mystery about his journey, he knew very well what he wanted and controlled the routes. Holmboe’s knowledge of the people and their traditions was at an advanced level and it is this knowledge that stopped many dangers from coming his way.

Secondly, Asad traveled to many countries whilst Holmboe’s journey was short and covered only major cities in three countries. Finally, Asad became more and more involved with the customs, traditions, and politics of the countries, whilst Holmboe tried his best to stay away from any direct involvement with the local politics. It is safe to say that Asad was lost in the vastness of the desert, whilst Holmboe’s desert was more narrow and local.

It appears that Asad shared the same dream as many Muslims of that time as well as their traditions, and the glorification of Islamic history. This can be seen from his relations with the Indo-Pakistani poet Allama Iqbal (1877–1938) and also when he was Pakistani representative to the UN; as he notes
I was serving, but when my activities at the United Nations made it obvious that I identified myself not merely’ functionally but also emotionally and intellectually with the political and cultural aims of the Muslim world.

Asad’s journey had a political twist and he was very vocal about his support for Muslim causes. For example, his conversations with Dr. Weizmann, a Zionist propagandist, where he logically and passionately defended the Muslim cause. Holmboe, on the other hand, was very reserved and hardly expressed any of his political views. He was more of a passive observer.

It becomes apparent that Holmboe tried to keep himself away from any political adventure and concentrated on only executing his plan. He does show some sympathy toward the natives; however, this sympathy is born from pure humanistic philosophy; nowhere in the book does Holmboe show any inclination toward any global Islamic identity. This humanistic character can be understood from the last passage of his book when he said:

“They [the East and the West] are two branches of the same tree. And when a man, regardless of whence he comes, seeks deep in his heart, he will feel the longing for the root of the tree.”

Although his understanding of common human genealogy is correct, it overlooks the importance of Islamic brotherhood, which is based upon religious teaching. Throughout the book, Holmboe fails to realise that the faith, of which he is a member, demands a sense of dedication and commitment to his fellow Muslims and its politics, which transcend beyond mere humanistic philosophy.

Holmboe’s travel, in many ways, can be considered a historical document of political and social oppression of a nation, an eyewitness to the events, his book acts as a window to the evil actions of the Italians. Strangely, the last part of the book is more like a report than a travel log, although it is narrated and written in travel log style. Holmboe started his journey with a clear plan, but he seems to lose it at the end of the book because situations forced him to.

Asad, on the other hand, started to have a more clear picture of his journey, like Holmboe, Asad did not do this consciously but rather the events forced him. Holmboe’s book is mature, serious and to the point whilst Asad’s book is romantic, more like a folktale, and less serious.