Homebooks & articles recommendationWhat went wrong with the Muslim response to... 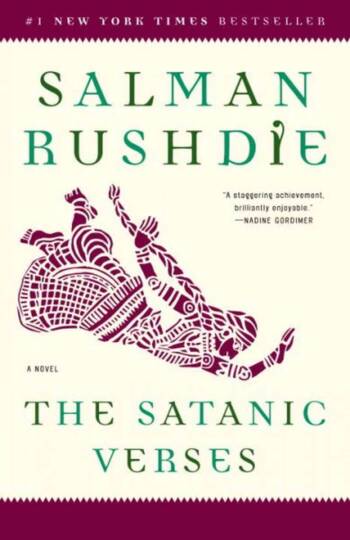 What is known as the Rushdie affair is an outgrowth of the publication of Salman Rushdie’s book The Satanic Verses in September 1988 by Viking Penguin. It has been haunting the global Muslim population since then. The book sparked outrage and triggered large protests which led to street riots, deaths and injuries. All these fuelled negative media coverage of Muslims and their religion.

According to Columbia University Professor Hamid Dabashi, The Satanic Verses is now manipulated for totally non-literary purposes, as many use it “to explain or to camouflage their anti-Muslim hatred, and Muslims – to denounce ‘the West’ and its plots against the Muslim world.” More than three decades on, the shocking attack on Salman Rushdie at Chautauqua in upstate New York on August 12, 2022 reignited issues related to the Rushdie debate.

Before the Rushdie affair, Muslims in the West, especially those in Britain, were identified mainly by their ethnicity – Asian, South Asian, African, Middle Eastern, etc. The Rushdie affair catapulted them into the whirlpool of media and defined them, first and foremost, by their religion. Today in the era of Islamophobia, such identification has not augured well for Muslims, especially those living in Muslim-minority countries.

In November 1988, the late Palestinian-American scholar of literature Edward Said was in Algiers to attend a Palestinian National Council (PNC) meeting. It was there that he received Rushdie’s typescript of The Satanic Verses. He later told British writer and journalist W. J. Weatherby: “My impression was that [Rushdie] was expecting the novel to have an impact…. He said it would shake up the Muslims.” In “Risky deconstruction: The Rushdie affair” (1996), Michael Thorpe maintains: “One cannot doubt Rushdie offended deliberately…. Beginning with the title, The Satanic Verses is never indirect; it strikes directly at the heart of both Islam’s founder and its sacred book.”

Being a writer of Muslim background, Rushdie knew the Muslim sentiment well and could foresee the consequences of the content of his book. What is more, writer and journalist Khushwant Singh had advised Rushdie and Penguin against publishing The Satanic Verses. However, despite such external factors and considerations, Rushdie had every right to decide whether or not to write and publish The Satanic Verses; for one thing, he received huge advance royalties for the book.

There are specific contexts that should lead a writer to self-impose limits on their freedom of expression if their work “published in London or New York” can potentially “kill people in Karachi or Bombay.” But that is a topic for another article. Here I want to focus on the Muslim response to the Rushdie affair.

The Satanic Verses is a written work that made fun of Islam, its Prophet and his companions. Instead of countering it in a like manner (writing through writing), many Muslims spilled out into the streets to yell for the book ban and for the author’s punishment. In my opinion, this was a sign of their mental sterility and academic stagnation.

There were of course Muslims who distanced themselves from the hysteria over the publication of the book and were against Khomeini’s fatwa. One of them, the late Ali Mazrui of the University of Michigan wrote a wonderful critique of The Satanic Verses. His opinion was to “leave Salman Rushdie to Heaven!” Similarly, Mohammad Akram Nadwi of the Oxford Centre for Islamic Studies was of the view to “ignore” the book.

Egypt’s Nobel Prize-winning writer Naguib Mahfouz disliked both the book and the fatwa. He once said: “We need to differentiate between free speech and disrespect for religious symbols. Every man has the right to stretch his arms, for example, but not to the extent that he hits the face of the person next to him.” However, such unconventional voices were largely unheeded, as the general run of Muslims jumped onto the bandwagon of public fury and opted for street demonstrations. They shunned the painstaking method of engaging with The Satanic Verses intellectually.

Rushdie’s book was not the first, nor the last, to blaspheme Islam or slander Muslims. Khaled Abou El Fadl of the University of California, Los Angeles cites the examples of Abu Nawas (756?-814) and Abu al-’Ala’ al-Ma’ari (973-1057) who composed profane poetry. However, Muslims in those days didn’t bother to burn or destroy their poems. Nor did they shout for the death of the poets. Being intellectually competent and confident, they rather “preserved, studied, analyzed and countered” them by producing equally or more brilliant work.

Rushdie’s book was followed by other artistic productions that ridiculed Islam and its symbols. Unfortunately, in all or most such cases, many Muslims betrayed the same predilection for street rallies. They seemed to have been reluctant to engage in rigorous research and scholarship as countermeasures to such attacks on their religious sensibilities.

Especially in the case of the Rushdie affair, street demonstrators ran amok and sought to stop the circulation of The Satanic Verses through protest marches. They bought the book, photocopied its sections they deemed offensive and discussed them in public meetings and in the media. In cities around the world, they “exploded with indignation” and “ceremonially burnt” copies of the book.

Such outbursts of emotion were at best unproductive and at worst counterproductive. They no doubt increased the sale of the book and piqued the curiosity of readers who would otherwise never flip the novel or hear of its author. Before the Rushdie affair, as Hamid Dabashi notes, Rushdie as a writer was known “only to a community of South Asian literary aficionados.” But street protests against The Satanic Verses made him a world writer and contributed to the book’s promotion.

In denouncing the book, Muslims gave it a competitive edge in the market – something proven to be a boon for the coffers of Rushdie and Penguin. Khomeini’s so-called fatwa forced the writer to go into hiding but ironically helped sell the book in a large way. Therefore, if the The Satanic Verses is a succès de scandale, Muslims cannot avoid responsibility for making it so.

Despite Khomeini’s un-Islamic “fatwa” and street protesters’ cacophonous demand for Rushdie’s head, the writer is still alive. But what about all those people – mainly protesters – who died because of the public disorder that erupted after the publication of the book? Many would blame Salman Rushdie for these deaths (which according to one report reached 45). But can Muslim organizations and rabble rousers who invited protesters to agitate in the streets avoid responsibility?

Many have rightly denounced the deplorable attack on Rushdie in New York. But what about midnight door knocks and forced disappearances of journalists and writers in countries ruled by autocrats?

While Muslims must avoid book-burning and other forms of furore, the self-styled champions of free speech cannot overlook the abovementioned issues. Silence on them will complicate the freedom of expression discourse and may not further the interest of Salman Rushdie as a writer.