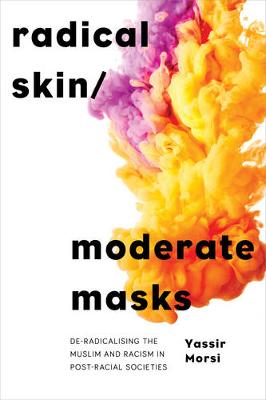 Frantz Fanon’s Black Skin White Mask is a historical critique of identity, particularly the identity of Blackness.  What happens to the psychology of the colonised when they wear the mask of their colonisers is the question Fanon tries to answer in this book. Yassir Morsi, influenced by Fanon’s book, wrote the  Radical Skin,  Moderate Mask which is an  autoethnography; it makes an attempt to understand and analyse the modern mask that he and his communities  are expected to wear.

The othering of others based on the colour of the skin has been a tradition of the West throughout history. This skin, according to the West, is more radical and became a threat, especially after the unfortunate event of 9/11. Muslims are required to whiten their Radical Skin as a sign of de-radicalisation. But this is not enough; a new category of the Moderate Mask must be worn to reassure the West they are safe from the Muslims and their culture.

Morsi finds himself asking a series of questions about his identity,  about his belonging and his roles in the society that he calls his own. He, however, was quickly faced with two major problems; firstly, he has this unfortunate skin that is meaningless, out of place , alien and mostly  Radical.  Secondly, he belongs to a culture that very few Westerners can fully  understand.

Morsi is forced to take a step back and analyses himself, his relation to the Western world, which he calls his home now. He looks at his experiences and how he fits into his surroundings.  The findings were shocking. He concludes that Muslims are no longer human by its own virtues.  Rather, they are required to prove themselves so as to enjoy and be equal human. It is only then that their humanities are valued.  Muslims are continuously harassed to prove that they are part and parcel of the West.

The main question the book asks is how the Muslims can survive and contribute to wider societies when they are constantly being told to perform and wear the Moderate Mask so as to fit in within the cultural makeup of the West. It is this Moderate Mask that can reduce the assumed threats the Muslims pose to the values and the heritage of the Western world.   By wearing this Moderate Mask, others are made to feel comfortable with the  Muslims’ presence. This Mask reassures others that Muslims are normal, have feelings and emotions, and, above all, they are human.

Muslims are demanded to wear this mask, so they wear the mask and play the role and read the script that they are given. In order to understand the Moderate Mask’s phenomes, Morsi presents three case studies. First, there is the Fabulous Mask. The second case studies the Militant Mask and the last study is the Triumphant Mask.

Fabulous Mask is studied through well-known Muslim-Australian commentator Waleed Aly. Aly in his writing rescues the ‘good Muslim’ from the darkness of conservatism and being seen as backward. Aly wears this Fabulous Mask which portrays him and Muslims like him as the good Muslim, the Human-Muslim and A Muslim who is funny and progressive.  This mask allows him to be a Muslim and yet is in line with Western progressivism.  Fabulous Mask views the Muslim as a producer, a contributor to the capitalist world. The Muslims’ values and traditions as a human are sidelined. The Muslim exists because others needs them. They do not exist because they are human.

Militant Mask is studied through the American Muslim convert Mr Hamza Yusuf, considered by some as a leading Muslim scholar in the West. Militant Mask is not what some may otherwise understand, but rather refers to a scholar whose position is used to keep the Muslims and their criticism of injustice in check. Militant Mask uses religious text and religious authorities to stop the Muslims being critical of the injustice their fellow Muslims are experiencing. With this Mask Islam becomes a personal entity and about personal development. It leaves little or no space for the concept of the holistic life of the Ummah to exist.

And then, lastly, there is the Triumphant Mask which is studied through the commentator Maajid Nawaz, who, according to Morsi (2017, pp101) “escape[ed] from the Dionysian world of Islamism to an Apollonian humanism…”. This mask is the winning mask. It is a mask that is accepted and promoted by the greater societies. This Triumphant Mask is the so-called light at the end of the tunnel of co-existing.