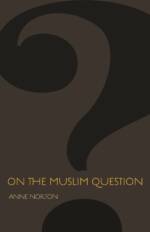 In the fourteenth episode of the tenth season of ‘The Simpsons’ Apu, the owner of the Kwik-E-Market celebrates Valentine’s Day with his  new wife  Manjula. He presents her with lavish gifts and suffocates her with love. This display of romance from Apu had made the wives of Springfield jealous. Homer Simpson becomes frustrated over his wife complaining and comparing him with Apu. He goes to the pub and stands on the table, gathering everyone around him and says:

“And ask yourselves, people, who’s to blame for all this?” referring to the complaining and comparing of their wives. “Well…we are…” said the crowd.  Homer then says, “Yeah…It’s easy to blame ourselves…but it’s even easier to blame Apu! He’s making us look bad!”

The statement represents a deep sense of anxiety and failure on the part of Homer. Instead of accepting his faults, Homer pushes the blame to Apu. That is because “it’s even easier to blame Apu”.

The thesis of Anne Norton’s book On the Muslim Question can be understood in light of the above example of Homer. Apu can be said to represent the ‘others’ and Homer the West.

“The concerns the West directs at Muslims map sites of domestic anxiety. European states – indeed all the states of the liberal and social democratic West – are faced with continuing questions about the status of women, sexuality, equality and difference, faith and secularism. They are fueled by anxieties over the meaning of the past and the direction of the future. The European constitutional crisis is impelled in part by an uncertainty over the status of Christianity in the constitution of Europe.”

Such bloody history is therefore unbearable for the Western World. Norton presents The West as bearing such guilt that, like Homer Simpson, they needed someone to dump this blame onto. A new bearer of such guilt was needed. The Muslim world, with all its weakness, presented itself as the perfect candidate.

Throughout the book Norton tries to highlight two points. The first point is that the Muslim problem is an imaginary one created by the anxious West. To substantiate this claim she points towards many Western thinkers, politicians, commentators, writers and journalists’ writings which echo the so-called Muslim problem. These people also hold the view that the solution to the Muslim problem can only be found by the Westerners.

“Speech is said to be “free speech” when-and only when-it is used to attack Muslims, Islam, or the Koran. When free speech becomes a Muslim question, its principle fails and its practice narrows.”

This contradiction and the failure of the principles of freedom of speech which is so dearly held and promoted as an almost divine doctrine by the Westerner becomes self-evident. To void these anxieties and achieve some relief from the obvious contradiction, the lack of freedom in the Muslim world is massively highlighted.

The same principle of diversion is also created when it comes to the issue of the oppression of women. Norton argues that the West has a long history of oppressing women in the past and also in the present and this presents a major issue. Any domestic criticism of the oppression of women and their role in the social sphere would be a PR disaster for the West.  Saving the Muslims from their ‘oppressive’ religion and their ‘misogynistic’ societies becomes the mission of the Western feminist. As Norton notes:

“…Islam oppresses women. Any woman speaking in its favor must be deluded or forced to speak against her will. If she defends the hijab or speaks in defense of polygamy, she cannot be believed. No woman in her right mind could defend these. Any woman who does must be deluded or coerced. The more Muslim women object to Western efforts to “help” them, the more need there is to liberate them.”

This diversion takes the blame of domestic oppression of women to the other, thus creating a sense of superiority of Homer over Apu.

After discussing the imagined problem of the Muslims created by the West, Norton moves to the second point. Here, she invites the critic of Muslims, Islam and the flagbearer of Western liberal democracy to investigate the reality on the ground. Muslims are everywhere. They are part of Europe in some form or shape. Islam is at home. This reality cannot be wiped out, she argues, by the mere conceptual clash of civilisation. The everyday life of the Muslims in the West are proof to her that Islam is and can be part of the Western identity. Muslims are now creating a new European convivencia.

The argument that Islam refuses democracy is forwarded by Jacques Derrida in his book Voyous (translated as Rogues) and in Clash of Civilizations by Samuel Huntington which only reinforces the imaginary problem of the Muslims.  Such a thesis does not have significant empirical evidence and only exists in the mind of the one who creates these theses. Norton also points out that Islam and Muslims are far from the other democracy as claimed by the famous Western jurist John Rawls in his work The Law of people. Islam and Muslims are not the so-called other democracy but they are part of our democracy.

Norton provides a thesis which is somewhat unique in analysing the occidental mind-set. Such analyses will help the others to better understand the inner anxiety the Western world has. It will help the so-called others to lessen their daily burden of public apology, which they unfortunately do because of the original sins of the Western world. It is for this reason, among others, investing in the book is highly recommended.