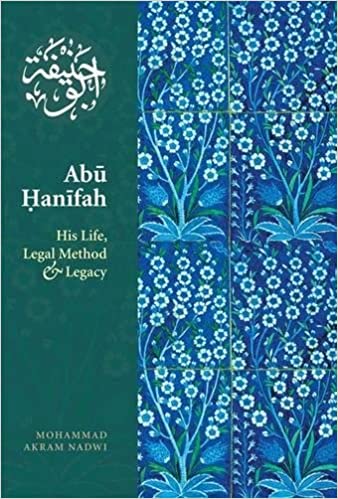 This very short, albeit highly erudite work of hagiography has been written by a scholar who has engaged with Abu Hanifa and his legacy for a very long time. By using only the most authentic reports found in the classical Islamic prosopographical collections, original Arabic and Urdu sources and core Hanafi legal texts, the author endeavours to understand ‘why’ and ‘how’ Abu Hanifa came to inherit the appellation ‘Al-Imam al-A’zam’ (the greatest one worthy to be followed), an epithet which is worthy of him today as it was in his days.

The book is written in the typical format of a classical Islamic biography work. He discusses, Abu Hanifa’s life, his life style, his erudition and probity, his piety and propriety, his scholarship, his teachers and his students. He talks about him as a jurist, a lawyer, a theologian and a Hadith scholar. The impact of Abu Hanifa’s fiqh and its status in the modern age is discussed in details. All of these discussions take place within the framework of the overall development of Islamic law in general. The quality of the book is further enhanced by the use of diagrams and an annotated reading list. At this juncture, given the plethora of sources found on Abu Hanifa’s life in English in the form of monographs, articles, introductory sections to translated classical texts, translations of Arabic and Urdu books, audio and visual recordings and the internet, the question that looms on this reviewer’s mind is ‘what is the need for yet another biography of Abu Hanifa?’

The reviewer believes that it is what the author wants to do with the biography of Abu Hanifa that justifies the writing of this book. The author deems it pertinent to write this book because of three reasons. Firstly, he takes issues with the many voices from within and outwith Islam shouting for an Islamic reformation. He argues that Islam’s contribution to the modern world especially in trade and commerce has been advanced by people like Abu Hanifa and his ilk. It’s only through understanding and emulating the lives of these pious savants that some of the ethical and moral principles that have been lost can be restored. Secondly, information readily available through high-speed medium is not ‘ilm but short lived, bereft of any substance and missing the personal touch of a wise master. Through this book, the author wants to remind us that true ‘ilm can only be sought through slow and painstaking study where the knowledge is passed from heart to heart.

For this reviewer, the most unique contribution of this book is the author’s third reason for writing the book. The author draws a distinction between Abu Hanifa and later Hanafi scholars. That Abu Hanifa is someone who understood the context as well as the text, that he made a distinction between the spirit of the law and its word and that his understanding of the law is not partial but holistic. He urges Muslim scholars to recover both their intellectual ability as well as their moral authority to understand the Qur,an and Sunna in its entirety and not just in parts. The scholars will find a precedent for this in Abu Hanifa, who paradoxically, was neither a Hanafi nor a professional Hanafi Mufti. This is a streak that one can implicitly see throughout the work (pp. 115-120). The author very subtly tries to rescue Abu Hanifa from Hanafi scholars who are engaged in ‘self-contained discourse’, where the fiqh is presented ‘with reference to itself rather than its sources’, a partial and anachronistic understanding of fiqh that is severed from reality.

Equally unique is the author’s discussion on the development of the sciences of Hadith. One of the major drawbacks, that this reviewer has noticed, in some traditional Islamic circles is that people tend to treat the works of the scholars in a way as if they were all written in the same era; working with the same hermeneutical devices and employing terminologies that are ossified in time. This kind of attitude towards the sources leads to misunderstanding and unfounded criticism as the author has shown. Abu Hanifa cannot be blamed for following a hadith deemed to be weak by later standards if those standards were not available in his day and age. If the Hanafi School is founded upon those standards used by Abu Hanifa, then it is not fair to judge the actions of its followers through later developments. This is a very important subject as it will put a lot of minds at ease as to why seemingly Abu Hanifa does not follow sound Hadith.

A few personal observations. One does not get an inkling of the author’s opinion regarding the authorship of Al-Fiqh Al-Akbar. Abu Zahra opines that some of the topics discussed in the work seem to have developed after Abu Hanifa. It would have been interesting to see how the author reacts to this assertion. The author very brilliantly sheds light on Abu Hanifa as a Hadith scholar. However, this discussion would have been further enhanced if the author addressed the common cliché that Abu Hanifa knew only 17 Hadiths. An assumption that stems from a comment made by Ibn Khaldun in his Prolegomena (although Ibn Khaldun does indicate it to be a weak claim by using the passive perfective verb ‘qeela’). A section on the Hadith works of the school would have nicely complimented the legacy of Abu Hanifa. Finally, ‘Radd al-Mukhtar’ should read ‘Radd al-Muhtar’ (p. 111).

The author has successfully delivered his promise to understand as to ‘why’ and ‘how’ Abu Hanifa came to deserve the title ‘Al-Imam al-A’zam’; it now remains the duty of the scholars to imbibe Abu Hanifa’s teachings in trying to understand the Qur’an and Sunna holistically in both letter and spirit.

Dr. M. Mansur Ali is a Lecturer in Islamic Studies at the
School of History, Archaeology, and Religion at Cardiff University
He is part of a new generation of young British Muslim scholars. He started his preliminary Islamic studies at the Darul Ulooms of Birmingham and Bury, where he completed his studies in 2000 with a grade A distinction. He had the honor of reciting the complete Sahih al-Bukhari to his teacher whilst the other students listened. His studies focused on traditional Islamic sciences and classical Arabic such as Arabic etymology, syntax, philology, literature, and pragmatics and rhetoric; classical Tafsir, Hadith, Hanafi fiqh, classical legal theory, Qur’anic hermeneutics, didactic theology, and basic Islamic philosophy.