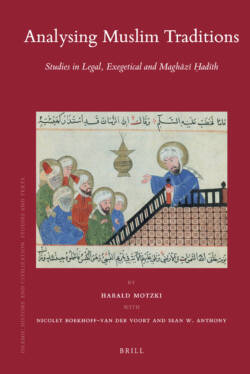 Classical orientalist studies of Hadith generally fell under the studies of the origins of Islam. Hence, the primary focus of these studies was to prove the origins and provenance of Hadith. With the absence of any sources contemporary to the Prophet, Western scholars’ attitude towards the corpus of Hadith was sceptical. In other words, for them, in contrast to the Muslim view of Hadith, every hadith was deemed to be a forgery until it can be proven otherwise. Scholars discarded the Muslim approach to Hadith verification as being too formalistic and based only on external criteria (isnad). Hence, they devised their own methodologies for verifying the authenticity and origins of Hadith. Harald Motzki suggested that it will not be prudent to wholly do away with the chain of narrators as a careful study of these chains can tell us a lot about the provenance of a hadith. Rather, the chain of narrators should be studied in tandem with the text of a hadith, which Motzki calls the isnad-cum-matn approach.

The book under review is a collection of articles written by Motzki over the last three decades. The last two articles in the book were written by the other two co-authors. In its preface, Motzki discusses the contents of the book and the processes the articles went through before being available in English. This book has many merits; firstly, all of Motzki’s articles found in this book are being presented in English for the first time. Secondly, all the articles in the collection employ the isnad-cum-matn approach first formulated by Motzki in his study of the Musannaf of ‘Abd al-Razzaq al-San’ani (d. 211/826). In addition to this most of the articles are responses to other scholars who were/are also engaged in the study of the origins of Hadith: chapters 1 and 6, Schacht; chapter 2, Juynboll, chapters 3 and 4, Irene Schnider and chapter 5, Herbert Berg.

Chapter 1 functions as the methodological introduction to the book, while the rest of the chapters are an application of this method. Chapters 5, 6, and 7 take the application of the isnad-cum-matnmethod out of the legal domain to other disciplines such as tafsir and maghazi. They show that theisnad-cum-matn approach can easily be extended to other disciplines and yield similar results unlike Schacht’s method which yielded erroneous results when taken outside the legal traditions, as Cook has shown. The author of chapter 6 has done us kind by providing the Arabic script whilst comparing different versions of a hadith as it is a daunting task to follow slight orthographical changes whilst reading the transliteration. The author of chapter 7 has a wonderful introduction to historiography in general in the introduction to his article.

For this reviewer, the most original and interesting contribution in this book is chapter 2. Over the years, GHA Juynboll has developed, expanded and polished Schacht’s common-link theory to the extent that, for Juynboll it has become the only methodology (usul al-Hadith) worthy of studying Hadith with. Juynboll used this methodology to study the six canonical Hadith collections. It has also been employed by Muslim feminists such as Nevin Reda to prove the authenticity of Hadithrelated to female leading the prayer in a mixed congregation. However elaborate the theory is, in this chapter, Motzki proves that it nevertheless suffers from many methodological and epistemological flaws. This is the most rigorous critique of Juynboll’s common-link theory and a must read for the serious students of Hadith. He shows that in order for the common-link theory to work, every strand of the chain of narrators for a particular hadith text needs to be scrutinised. Without doing this the common-link theory will not yield accurate results. He demonstrates that Juynboll’s over reliance on the chains of narrators found in al-Mizzi’s (d. 742/1341) Tuhfat al-Ashraf (which is only restricted to collecting the chains of narrators found in the six canonical collections and a few other books), is what lead Juynboll to make erroneous conclusions such as denying the historical Nafi’ the client of Ibn ‘Umar (d. 117/735).

Contrary to what some Muslims believe, orientalists are not there to deconstruct and dismantle the foundations Islam. In the absence of any early writings, they try to make an objective and honest attempt to understand what really happened in this early period of Islam. However, it becomes problematic when scholars hold on to their methods religiously even though the fallacy of their approach has been proved. Motzki has obviated all of Juynboll’s arguments and yet, Juynboll makes no attempt to modify his theory as can be seen in his latest work such as The Encyclopaedia of Canonical Collections.

Motzki’s works are highly valued amongst Muslim circles as it comes close to their own scholarship. However, accepting or rejecting Motzki’s thesis will depend on how much reliance one is willing to place on the chain of narrators. At a cost of £149.15 it is not your average coffee table book nor is it an easy read. However, if one can patiently wade through the welter of names and dates, the results are satisfactory. Finally, few orthographical mistakes do not detract from the excellent scholarship displayed in the book. (p.3) ‘Annahu sami’ituhu yaqul’ should read ‘annahu samia’hu yaqul’, (p. 10) ‘first quarter second century’ should read ‘first quarter of the second century’, (p. 23) ‘any of theses types’ should be ‘these types’.

Dr. M. Mansur Ali is a Lecturer in Islamic Studies at the
School of History, Archaeology, and Religion at Cardiff University
He is part of a new generation of young British Muslim scholars. He started his preliminary Islamic studies at the Darul Ulooms of Birmingham and Bury, where he completed his studies in 2000 with a grade A distinction. He had the honor of reciting the complete Sahih al-Bukhari to his teacher whilst the other students listened. His studies focused on traditional Islamic sciences and classical Arabic such as Arabic etymology, syntax, philology, literature, and pragmatics and rhetoric; classical Tafsir, Hadith, Hanafi fiqh, classical legal theory, Qur’anic hermeneutics, didactic theology, and basic Islamic philosophy.