HomeSubjectsTravel/MemoirsAccount of China and India 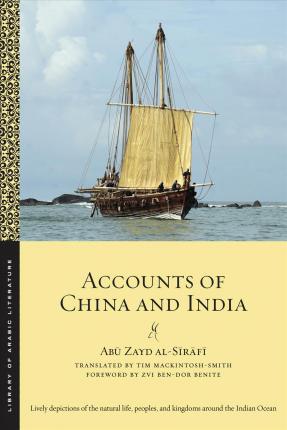 Allama Syed Sulaiman Nadvi’s book the ‘Arab Navigation’ highlights the historical relationship that existed between the Arabs and the sea; although this relationship existed from the pre-Islamic era, however, the post-Islamic era saw this relationship blossom, to such an extent that almost all major cities of the Islamic empire had seaports where international trading was taking place. One such major port is Siraf, located on the north shore of the Persian Gulf. The book ‘Akhbar al-Sin wa Al- Hindi’ was written by Abu Zayed Al Hasan Al-Sirafi and as the last inscription of his name suggests, he was from the port of Siraf.

The account of China and India is Tim Mackintosh-Smith’s English translation of Akhbar al-Sin wa Al- Hindi. It is an account of China and India, and the islands surrounding them. It also mentions the regions of Oman and Bahrain. The book is divided broadly speaking into four sections: the first section is the opening section of the book, and it includes many parts such as a letter from the general editor, forwards, acknowledgments, an introduction, a note to the introduction, and a map of the journey. Akhbar al-Sin wa Al- Hindi consist of two books, therefore the second section is the translation of the first book and the third section is the translation of the second book. The last section consists of notes, references, bibliographical details, and other publication-related information.

The translator spends a considerable amount of time analysing the authenticities of the two books, their authors, and their relationship to other travellers, for example, some portions of Akhbar al-Sin wa Al- Hindi appears in Al-Mas’udi’s Muruj adh-dhahab wa ma’adin al-jawhar, therefore, a huge effort is put into working out: ‘who got what from who?’ (2017. pp. xxvi ).

As mentioned above, Accounts of China and India is a translation of two books with the author of the first book being unknown. The translator presents much debate as to who the author could be. Much of what we know is that the first book is from Abu Zayd, the sole author of the second book. Abu Zayd provides a semi-commentary, with newly added information and places the date of the first book around 237/851-52. He notes ‘I have examined this foregoing book (meaning the first book), having been commanded to look carefully through it and to verify the information I find in it. Moreover to supplement ‘with other reports […] known to me but not appearing in the book’ (2017. pp. xx).

Both of the books provide information about the different tribes, sea routes and people’s social-political systems. A fair amount of detail is given about the people of China and India, their habits and social make-up, along with their kings and their courts. For example, Abu Zayd related that human meat was available for purchase in Chinese markets (Smith 2017). In addition, to illustrate India’s famous tradition of self-burning, he mentions the story of the kingdom of Balhara. In this kingdom, the king would cook certain kinds of rice and invites people to eat voluntarily; however, those who did not accept the invitation were bound by an oath that demanded that they were to be burnt alive when the king died or was killed (Smith 2017).

In addition, knowledge of sea routes is discussed in some detail and how one sea is connected to another. For example, Abu Zayd notes that ‘among the discoveries of this age of ours, unknown to our predecessors, is the previously unsuspected fact that the ocean onto which the sea of China and India opens is connected to the Mediterranean Sea’ (2017.  pp 41).

Among other things, which are mentioned, are the religious beliefs of transcending the souls to other worlds, and supernatural phenomena, which are related by tribes and sea dwellers.  And how the local people’s lives are governed by such beliefs. (Smith 2017). The treasures of the seas such as precious pearls and metals are mentioned to some extent.

The layout and the organisation of the translation are somewhat confusing and one can find it difficult to navigate through the book. Chapters do not follow a chronological layout; rather, different chapters are put together almost randomly, thus making it difficult for the reader to connect one chapter with another. When reading this translation, it is important to focus in order to create a mental connection between chapters.

The language style of the book is fairly accessible, although many foreign words and sentences are used, which is expected since the book is of foreign origin. However, having said this, the book is overall, an interesting read, giving the reader a picture of the author’s worldview, transcending barriers of creeds, races, colours, and languages.

Often, the breaking of such cultural barriers is championed as a post-modern achievement; however, as the Holy Quran says:

O mankind, indeed We have created you from male and female and made you peoples and tribes that you may know one another. Indeed, the noblest of you in the sight of Allah is the most righteous of you. Indeed, Allah is Knowing and Acquainted.

Finally, the mission of world discovery – in all its shapes and forms –  are for Abu Zayed a religious duty: one to be taken very seriously by the devoted Muslim.