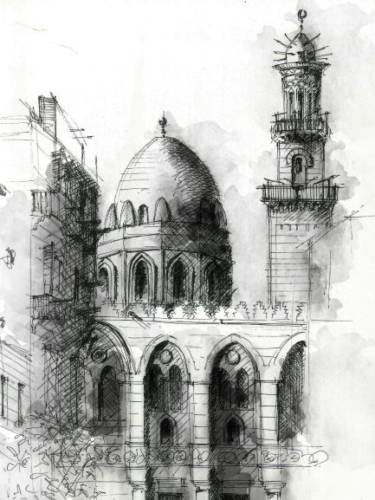 It is said that the famous poet Abu Tayyib Al Mutanabbi fled the battlefield and someone said to him, “Are you running away? Are you not the one who said,

‘Swift steeds, dreary night, and the desolate waste land, all know me full well, as do the sword, the spear, the writing paper and the pen’

So committed was Al Mutanabbi to his verses, that he returned to battle and there met with his end.  Poetry is an expression of one’s internal emotions and experiences.  Some even say that poetry is life itself; writing with the language of passion that not only captures the mere physical entity of time and space but something beyond.  I still remember reading the last few verses from ‘Digging’, a poem by the Irish poet Seamus Heaney, when attending my English lessons:

‘Between my finger and my thumb

It is not, of course, the digging with the shovel, as was necessary in the case of Heaney’s ancestors, but ‘digging’ with the pen that Heaney is referring to.  Hisham Hauari also rests his pen ‘between the finger and the thumb’ and he digs with it, ‘digging’ poetry not only as a form of mortal art but to unearth answers to questions about eternal life.  Hauari presents us with The Chain; a glimpse into what life was, what life is and what life can be and will be.

A philosopher in the widely-understood meaning of the term, Hauari has a deep passion for writing and sharing his experiences and has, as a result, authored a number of short morally motivating stories.  The Chain perhaps is not a poem in the traditional sense; which roams around almost in an imaginary world, much like the legendary Iraqi lover Qays ibn al-Mulawwah, more famously known as Al-Majnun, who died in the state of madness, finding neither love of Laila nor the pleasure of this world.  The Chain, however, remains in the realm of reality, creating an experiential relationship between it and the reader.

The Chain is many things; a poem of realism, an outline of world history and its past, present and future but, more importantly, is an active lesson which, if understood correctly, much can be gained from.  Hauari starts by highlights the poem’s subject matter, the “…cyclical sequence of moral interconnectedness that characterises human history”.

It is an epic poem, in a free-verse style, with little or no metaphor, and Hauari has very skilfully summarised the world’s history and presented this somewhat rhythmically.  Hauari chained the world’s history into one ‘whole’ connected chain without this ‘whole connected chain’ taking away from the character of each individual verse or each period of history.  For a better appreciation of Hauari’s work, sectioning the poem according to themes, historical period and subject matter become a must.

The poem can largely be divided into a number of historical periods or themes for better appreciation, namely the creation of the human being, the complexities of internal emotions of the human being, which involve envy, jealousy and pride, the representative of Allah (may He be glorified) on earth throughout history and stories of the world’s civilisations, including the birth of Islam, the rise of Islam and the downfall of Islamic civilisation.  In Chain’s view, the downfall of Islamic civilisation creates a moral and ethical gap.  This gap is the reason for modern-day social confusion and its binary world view.

Lastly, Hauari concludes the Chain with a solution to the world’s problems:

“We must go back to another way, the one before they came; At least then we were more than pawns in someone else’s great game.”

The Chain has a very subtle triangular approach to its structure with a beginning, a middle, and an end.  The chain, in many ways, represents the life circle of man, its journey from the heaven to the earth, and returning to the heaven.  Hauari details the activities of man in those three stages and notes that the absence of the Islamic worldview in our world has led to “The vision of a soul that in nature feels itself imprisoned…”

Hauari conveys the same message as many earlier poets such as Abul Atahiya, that every action has a consequence and this consequence can either lead us to everlasting bliss or everlasting doom.  The Chain has the potential of becoming a study material and a guide to world history for Muslim students with certain revisions to it facilitating access to a wider audience.  Hauari is to be congratulated for conveying this immensely positive information to the general Muslims in this new method and style, which is sure to evoke much emotion and discussion.