Inglorious Empire: What the British Did to India

HomeSubjectsHistoryInglorious Empire: What the British Did to India 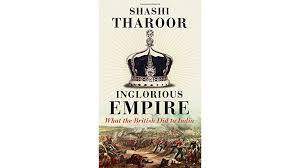 Inglorious Empire: What the British Did to India

The British writer and historian Alex Von Tunzelmann in her book Indian Summer made a very interesting historical observation that really collaborates well with the claims of the Inglorious Empire:

‘IN THE BEGINNING, THERE WERE TWO NATIONS.  ONE WAS A vast, mighty and magnificent empire, brilliantly organized and culturally unified, which dominated a massive swathe of the earth.  The other was an undeveloped, semi-feudal realm, riven by religious factionalism and barely able to feed its illiterate, diseased and stinking masses.  The first nation was India. The second was England.’

The England Tunzelmann describes has become the India of yesterday.  So what happened?  How does India suddenly find herself in poverty, unable to get up and reclaim the beauty and glory she once had?  The Inglorious Empire: What the British Did to India written by Dr. Shashi Tharoor, a member of the Indian Parliament, seeks to answer these questions and shows the sanctimonious history of Britain in India.  Although there are signs of recovery in her, the evil seed of division sown by the British, according to Tharoor, is starting to grow once again.

The idea of writing a book on the British Empire came about when the author delivered a speech in the Oxford Union on the question ‘Should Britain Pay Reparation to India’.  The speech was very well received and, as a result, the material of the speech was expanded into the present book.  The book is divided into eight detailed chapters covering major areas of India’s social, political, economic and cultural landscape.

Tharoor’s central argument is that before the arrival of the British India was rich in almost all areas of human development.  For example, Tharoor points out that “in the 1600s, when the East India Company was established, Britain was producing just 1.8 percent of the world’s GDP, while India was generating some 23 percent”.  By 1940, seven years before India’s independence from Britain, Tharoor notes that “after nearly two centuries of the Raj, Britain accounted for nearly 10 percent of the world’s GDP, while India had been reduced to a poor ‘third-world’ country, destitute and starving, a global poster child of poverty and famine”.  A similar style argument of before and after is given for all other areas of social and cultural development and, in doing, Tharoor also presents the argument of those of his critics who are quick to point out that by and large the British Raj was beneficial and in some cases needed for India’s development.  They claim that the East India Company and its board of directors (many of whom were members of the British Parliament) had the interests of India in their hearts at all times.  Such arguments are analysed and an alternative historical narrative is provided.  Critics of Tharoor often highlight the example of the legendary Indian railway system as being a sign of one of Britain’s valuable achievements in India.  However, as expected, Tharoor examines these claims and argues that the whole railway system was purely built for the interests of the British and has nothing to do with the bettering of the life of ordinary Indians.  Tharoor refers to a ‘post-Independence cartoon to highlight his point, which “…showed an overcrowded train, with people hanging off it, clinging to the windows, squatting perilously on the roof, and spilling out of their third-class compartments, while two Britons in sola topis sit in an empty first-class compartment saying to each other, ‘My dear chap, there’s nobody on this train!’”.

The book develops into a full-fledged cross-examination of many such claims and provides an alternative narrative that is not only supported by archive material on the British Raj but also by oral traditions among Indians.

The British Raj was, according to the author, directly responsible for the degeneration of many of India’s industries such as the textile industry, which was the cheapest to run and best in the world.  Britain’s clothes manufacturers were unable to compete, wanted them destroyed and, as Tharoor points out, “The soldiers of the East India Company obliged, systematically smashing the looms of some Bengali weavers and, according to at least one contemporary account (as well as widespread, if unverifiable, belief), breaking their thumbs so they could not ply their craft…”

For too long the British Raj has been represented as a compassionate carer of India, doing everything in her power to care for and look after its subjects.  However, Tharoor’s work not only challenges this fantasy but also investigates and scrutinises the untold history of the British Raj.