HomeSubjectsHistoryBlood and Faith: The Purging of Muslim Spain... 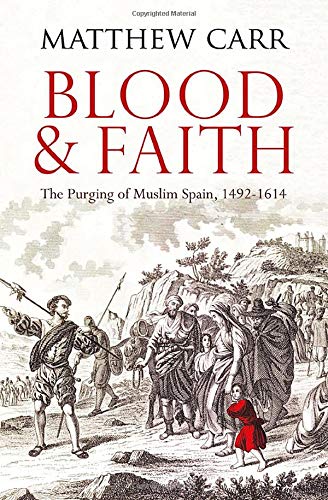 “And you who are living in luxury beyond the sea enjoying life, you who have the strength and power in your homelands,

Have you no news of the people of Andalus, for riders have

carried forth what men have said [about them]?”

My late father (may Allah have mercy upon him) would often threaten me by saying, “Zareh fua za ekhdin hikbeh neh moza zehdin tara odesh toneh toreh lathmari bakhoriya deh,” which loosely translates as “Go boy go.  You will learn your lesson one day when they kick you out of this country.”  My lack of interest in sharing my father’s world view was often the cause of this threat.  Naively, my young age and the deep sense of belonging overlooked the wisdom contained within this statement.  It was as if my father had read Blood and Faith by Matthew Carr.  Or was Carr only contextualising my father’s statement?  Either way, I somewhat understood what my father meant after reading Blood and Faith.

When France in 1904 established Mauritania as their colonial territory, an interesting conversation took place between a desert dweller and a town dweller upon them seeing a French soldier in the town.  The desert dweller asked the town dweller whether he was a Muslim or a Christian or Jew.  Upon the response being ‘no’ to all these questions the desert dweller finally asked the town dweller that he must, therefore, surely be a polytheist, but the answer was again ‘no’.  Why do I mention this?  Because this story provides a window into the multicultural dimensions that existed within Muslim societies.  Islamic religious text was responsible for creating an environment which enabled multiculturalism and a multi-creed atmosphere to flourish.  When we study carefully the lives and social structure of Mauritanian desert dwellers or any other Muslim societies, it becomes very clear that they have a deep knowledge and understanding of different categories of humans that exist in this world, without them having met such a diverse array of people.  However, this was not the case with European Christendom.  Their knowledge and understanding of Islam was next to nothing.  With pure ignorance, the Europeans were able to create the theory of ‘Othering’.  Within the context of this theory, the purging of Muslim Spain between 1492 to 1614 becomes easier to digest.  This book is divided into three major parts and each part has several themes which chronologically helps develop toward a full expulsion of 350,000 Muslim men, women and children who were forcefully removed from their homeland.  This was, as the author mentioned, the largest removal of a civilian population in European history.  Carr shows that before the purging, there was the othering program which was adopted by the Spanish government, and this program is studied throughout the book.  Although at times it is not clear to the reader how this othering is taking place, it nevertheless comes together at the end of the book.

The othering program has some key elements that are noticeable throughout the book.  Xenoglossophobia dominated not only with commoners but it also echoed amongst the highest level of government.  In his Expulsión Justificada de Los Moriscos, Aznar Carsona described the language of the Muslims thus: (Carr. 2010. pp.114) “Their sentences were clumsy, their discourse bestial, their language barbarous”.  Furthermore, he goes on to say that “…even the least zealous Moriscos were still suspect in the eyes of Christian society because of their…language”.  Although Arabic was the language of the educated and the elite and much of Spanish literary traditional heritage was due to Islam and the Arabs, this did not prevent the spread of Xenoglossophobia.

The period between 1492 and 1614 can be described as the period of Islamophobia.  Every effort was made by the Spanish government and its religious elite to portray the Muslims and Islam as the others who do not belong to Spain.  In the chapter ‘The Vilest of People’ the author highlights Islamophobia in Spain by once again quoting Aznar Cardona’s denunciation of the Muslims as “…the vilest of people…” whose “…sentences were clumsy, their discourse bestial, their language barbarous, their way of dressing ridiculous…” (Carr. 2010. pp. 232)

Archbishop Diego de Haedo’s work Topografia e Historia General de Argel in 1612 depicts the Muslims as brutish, primitive, greedy, superstitious, dissolute, sadistic, and lack of civilization.  Although historical consensus on the Islamic civilisation has shown the very opposite.  Such usage of language allowed the once-friendly Muslim neighbours to become the enemy who must be feared.  Those claims were, as the author shows, a pure figment of the imagination on the part of Spain’s ruling class.  It was that image that was translated into policies.

Everything that was wrong with Spain and the whole of Christendom was blamed on Muslims.  If a Christian was unable to harvest his land, it was somehow the Muslim who was to be blamed.  There was, as the author highlights, some members of the elite and commoners who disproved of the Islamophobic policies, albeit for personal and social reasons.  The sympathy was never shown because Muslims were on an equal footing.  Such ideas were far beyond the most liberal members of the society.

Throughout the book the internal affairs and the conditions of the Muslims are also discussed.  In the chapter Parallel Lives, the author highlights the Muslims’ response to the purging movement.  The response from the Muslims came in three different ways.  There were those Muslims who migrated to other Muslim lands, where possible.  There were groups of Muslims who remained steadfast Muslims inwardly and publicly repeated what was asked of them.  And the last group converted to Christianity, albeit, by force and some later affirmed their faith sincerely.

The most striking chapter and perhaps the most relevant for our time is the last chapter entitled Epilogue: A Warning from History.  This chapter can be summarised from what the authored mentioned in the preface of the book:  “Throughout the two and half years that I spent writing and researching the book, it was difficult not to notice certain parallels between Spain’s sixteenth-century ‘Morisco question’ and contemporary Europe’s ‘Muslim problem’”.  If time becomes a factor for not reading the whole book, then at least this chapter deserves our attention.  The author in this chapter is perhaps warning us and trying to prevent any future publication on the subject, such as a book possibly entitled Blood, Faith, and Democracy; the Discrimination of the European Muslims 1614 – ?.