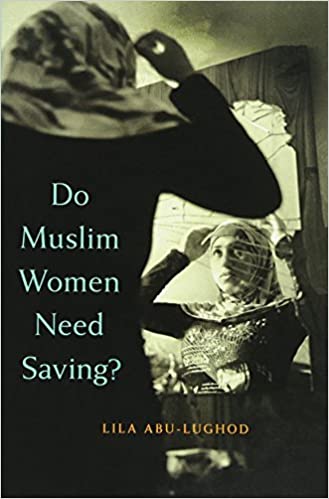 Lila Abu-Lughod’s (2013) publication Do Muslim Women Need Saving? builds on her 2002 article Do Muslim Women Really Need Saving? Anthropological reflections on Cultural Relativism and its Others. As an Anthropologist and ethnographer, Abu-Lughod sets out to study the lives, social and cultural world of Muslim women, who in the Western discourse are seen as being oppressed by their cultural and religious practice, and thus need saving. The Western world has taken upon itself the responsibility to carry out moral Crusades against what she terms the ‘Islamland’.

She argues that this ‘Islamland’ has become a paradigm in understanding Muslim women and Islam, especially after 9/11. All Muslims, regardless of their background and cultural differences are from Islamland. Western anthropological studies make no attempts to differentiate between the diversity that exists amongst Muslims.

Take for example Zaynab, Lila Abu-Lughod’s friend, who lives in a rural village in Southern Egypt. When Zaynab was told that the West thinks that Islam is the cause of women’s oppression, she replied (2013) “what? Of course not! It’s the government […] government oppresses women” (p1).

Moreover, Abu-Lughod sets out to deconstruct the accepted narrative of Muslim women in the Western world. This deconstructivism is done in her book by analysing several claims, assumptions, and the general stereotyping of Muslim women. Those claims, assumptions, and stereotyping are often found in the mainstream media, popular culture, and sensational publications. All these elements feed into the socially accepted narrative of Muslim women being oppressed. Abu-Lughod notes that much of the problems that Muslim women face in their country are either directly or indirectly created by the West and yet, the West portrays itself in high moral standing. Furthemore, she provides many examples showing how the problems were created by the West, and thus have worsened the plight of many Muslim women’s social and political conditions. Thereafter, once the situation becomes worse for Muslim women in Muslim majority countries, the West use it to their advantage for greater political interference. Take Afghanistan for example, where “the controversy over bibi Aysha indicates how central the question of Afghan women’s rights remains to the politics of the War on Terror that, almost from its first days in 2001, has been justified in terms of saving Afghan women” (2013, p.29).

The theory of saving Muslim women, as it is shown throughout the study becomes the central argument for West’s involvement in Muslim countries. All political spectrums in the Western world, including the feminists, liberalist and human rights groups buy into the saving Muslim women narrative, and in doing so, they overlook the social, economic, and political disadvantages, and in many cases physical harm that is experienced by the Western women on daily basis.

There is a consensus in the West that the greatest sign of oppression of Muslim women is the veil and burqa. These two items of clothing are two further manifestations that Muslim women need rescuing by the West. Popular books have been written to show that Muslim women are always fighting to free themselves from the prison of the veil; however, Abu-Lughod’s study shows that is not the case because Muslim women continue to wear the veil or the burqa even when they have had the choice not to do so.

It can be argued that the both the Veil and burqa are just a smokescreen to impose the Western lifestyle on Muslim women. In those popular books, women’s veils, their body, and their sexuality become central to the storyline. Those popular books are written by sensational journalists, who have very limited, if any knowledge of Islam or the culture of the Muslims they so freely write about. Such sensational books stir public opinions and reinforce the belief that Muslim women need saving. For all those sensational writers, all the wrong and suffering that women experience are found only in a distant land, and never at home in the West. For example, in Kristof and WuDunn’s book, Half the Sky: Turning Oppression into an opportunity for women worldwide, they highlight ‘the stories they [those authors] tell are from Africa, Asia, and the Middle East or immigrant enclaves in Europe’ (2013, p62). On the other hand, Half the Sky shows that it is only  ’American or European women [… that] are altruistic high school students who raise money to build a school in Cambodia or women who give up their jobs to devote themselves to working  in health clinics in  Africa (ibid).

Although Abu-Lughod language remains accessible to general readers, it also satisfies more academic-minded- readers. Her work is to the point, uses many examples, speaks with authority and confidence. Abu-Lughod’s book exposes arm-chair Western researchers and their oriental fantasy about Muslim woman needing to be saved. Her book needs to be on every Muslim’s shelf and needs to be taken seriously so that bright, forward-thinking young Muslims can ask the next vital question: Do Western women need saving?