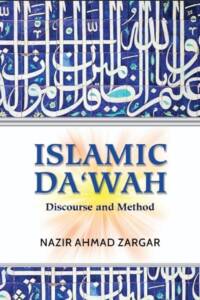 Da‘wah (preaching of Islam) is one of the notable topics in Islam and a significant genre of Islamic scholarship, to which both Muslims and non-Muslims have contributed significantly. Numerous works have been written on the subject of Da‘wah—its philosophy, methodology, pedagogy, prominence, tactics, discourse, and other allied dimensions in various languages, especially Arabic, Urdu and English. A latest addition to this rich genre of scholarship is Islamic Da‘wah: Discourse and Method by Dr Nazir Ahmad Zargar. Published by Kitab Mahal Publishers (a prominent publishing house from Srinagar, the summer of Jammu and Kashmir, India), the book discusses in detail all the dimensions of Da‘wah vis-à-vis contemporary relevance.

Dr Zargar is a prominent writer and preacher on diverse aspects of Islam. He has received higher degrees (MA, MPhil and PhD) in Islamic Studies and has previously taught at Shah-i-Hamdan Institute of Islamic Studies (SHIIS), University of Kashmir (KU), Srinagar (Jammu and Kashmir, India) and is presently working as Assistant Professor in the Department of Religious Studies at Central University of Kashmir (J&K). Dr Zargar earned his M.Phil. on “Da‘wah Methodology in the Contemporary Perspective” (in 2003) and Ph.D. on “Islamic Perspective on Peace and Justice” (in 2006) from KU. The present work is a revised version of his MPhil. He has translated (from Nazrul Hafiz Nadwi’s Western Media and Its Impact on Society.

Divided into six (6) chapters excluding Introduction, the books throws light on the conceptual aspects of Da‘wah, development of Da‘wah methodology, prominent Da‘wah organizations, qualities of a Dai and communication skills, and current challenges and the Da‘wah methodology to be adopted in contemporary global society. These chapters are preceded by ‘Publisher’s Note’ (pp. 5-6), Preliminary Notes (pp.13-14), Acknowledgements (pp. 15-16), Transliteration Scheme (p.17) and Preface to the Second Edition (pp.19-20) and end with a comprehensive Bibliography (pp. 273-79) and Index (pp.281-87).

The book has ‘endorsements’ from such reputed academics like Professor S. M. Yunus Gilani (International Islamic University Malaysia) who happens to be the supervisor of the author; Prof. Naseem Ahmad Shah (former Dean, School of Social Science, KU) and Prof. Bashir Ahmad Nahvi (former Director, Iqbal Institute of Culture and Philosophy, KU). They describe this book, respectively, as “valuable/ quite useful”, “unique/ commendable addition” and “worthy and laudable”.

In the lengthy “Introduction” (pp. 21-58) the author provides a detailed contextual background for performing Da‘wah as well as a brief outline of the whole work. Chapter 1, “Da‘wah and its Significance” (pp. 59-136) discusses at length meanings/ definitions, importance, objectives and ways and means of Da‘wah. Quoting amply from the Islamic primary sources (Qur’an and Hadith), the author puts forth the broader perspective of Da‘wah when he states: “In the Islamic theology, the purpose of Da‘wah is to invite people, both Muslims and non-Muslims, to understand Islam, its faith and practice” (p. 60).

Chapter 2 presents, as the title is self-explanatory, “Brief Historical Survey of the Development of Da‘wah Methodology” (pp. 137-154). Here the author divides it into three main phases—The Initial, Second and Third Phase, which cover the eras of the Prophet, pious caliphate and Umayyads and Abbasids, respectively—and begins with this statement which is crux of this chapter: “From the very beginning Islam bears the stamp of a religion if Da‘wah that seeks to win hearts and minds to lead them to their Creator—Allah. As it was in the beginning, so has it continued to the present day” (p.137). This is followed by two more sections, which respectively focus on “Da‘wah and the Later Generations” (pp. 146-151) and “Da‘wah and Spread of Islam in India” (pp. 151-154). In the last section, he enlists four (4) major factors “responsible for the speared of Islam in India” which include: 1) Da‘wah  activities of the Sufis; 2) and Da‘wah  efforts of the Muslim traders (p. 151) as both have played a “commendable” and “prominent role” (p. 152).

Chapter 3, “The Contemporary Da‘wah Movements” (pp. 155-191), discusses the contribution of four major Islamic movements/ organizations and “their Da‘wah methodologies”, namely al-Ikhwan al Muslimun/ Muslim Brotherhood of Egypt, Tablighi Jammat, Jamaat-i-Islami and Jamiyyat-iAhl-i-Hadith of India (p. 155), while not overlooking their “Weaknesses” (pp.188-191). In his analysis, the major factor responsible for the failure of these movements is that “they have not practiced perfectly what they preached” (p. 190).

Chapter 4, “Communicational Perspective of Da‘wah” (pp. 193-212), discusses the essential qualities to be possessed by a Dai (both at individual level and as a member of any organization); different classes or types of Mad’uwwin/ those who are invited and their qualities; and importance of language in Da‘wah as a means of communication between Dai and his addressees. This chapter too is mostly based on the verses of the Qur’an.

Chapter 5, “Da‘wah and Contemporary Global Society” (pp. 213-266), attempts to highlight in a detailed manner the nature and problems of the contemporary global society as well as the Da‘wah methodology to be adopted within such circumstances so that to overcome the challenges of diverse nature (political, socio-cultural, civilizational, ideological, ethico-spiritual, etc.) and to meet the demands of the contemporary global society. For him, the contemporary society faces a “multi-faceted and multidimensional vacuum … and no system or ‘ism’ other than Islam can fill this vacuum” (p. 253); therefore, “contemporary society demands that Islam should be presented as the most rational, problem solving and, above all, God-given Revelation for the guidance of man” (p. 263).

The book ends with chapter 6, “Conclusion” (pp.267-272), wherein the author highlights the role and significance of the Da‘wah throughout history as well as focuses on the methods/ modes and the methodology to be adopted by the Da‘wah organizations so that the negative image of Islam is replaced with its pristine image, which is mainly because of the “lack of well-organized Da‘wah based upon the Quranic [principles of] hikmah and maw‘izah hasanah”—i.e., wisdom and beautiful preaching, as in Q. 16: 125 (p.267). Besides the movements or organizations, he also refers to “other ways and trends operating in many corners of the Muslim world to present Islam to the people of all shades” (p.268) and some of these include “inter-religious dialogue”, “holding debates with people of other faiths”, “freedom of choice” and “to participate in essay competition on a particular Islamic theme” (pp. 268-271).

Though the book is rich in its contents and discussions on varied aspects of Da‘wah , however there are certain typo and technical errors from beginning to end (see, for example, pp. 57, 59n, 268, 269, 272). The book consists of six chapters and in the outline provides in Introduction it mentions incorrectly that it has only five chapters (p.57). Keeping aside these slips, IslamicDa‘wah: DiscourseandMethod is indeed a valuable addition and a commendable work on this subject and will prove helpful both to the students as well as to the general readers and Da‘wah  activists.