A Treasury of Ibn Taymiyyah 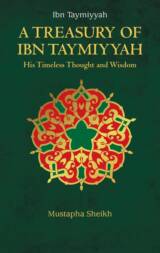 If I had to swear standing between the corner of the Ka’bah and the spot of Ibrāhīm, I would swear that I have not laid my two eyes on anyone like him [Ibn Taymiyyah], nor has he seen anyone as knowledgeable as himself.

Abul Abbas Taqi ad-Din Ahmad ibn Abd al-Halim ibn Abd-al-Salam al-Harrani, better known as Shaykh ul Islam Ibn Taymiyyah, does not require a lengthy introduction. Questions that one may ask are: what has made Ibn Taymiyyah so unique in Islamic intellectual history? What is it about Ibn Taymiyyah that captures the emotions of every sect and its ideological enthusiasts? Answering such questions is not an easy task. Sheikh’s (2020) work provides us with a new dynamic of Ibn Taymiyyah: one that challenges the two extreme positions that many authors have previously taken.

A Treasury of Ibn Taymiyyah, a pocket-size book, consists of thirty-four qawaid selected by Sheikh from the greater body of Ibn Taymiyyah’s work. Sheikh not only presents Ibn Taymiyyah’s views but skillfully arranges them in the form of a manual for the average Muslim. Moreover, Sheikh provides a detailed commentary of Ibn Taymiyyah’s work and includes a number of other authorities to support his conclusions. Despite dealing with complex qawaid, the commentary is clear, easy to understand, and relevant to the lives of Muslims. The main purpose of the book is ‘to present a fresh reading of Shaykh al-Islam, one which exhibits his penetrative insight and timeless wisdom’ (2020.pp.4). Sheikh’s collection of Ibn Taymiyyah wisdoms not only rekindles the pleasure of reading in our time but also offers relevance to classical teachings in the modern world. Furthermore, the teachings within the book have the potential to bring about or at least contribute positively towards the unification of the Muslim Ummah.

After offering formal acknowledgments, Sheikh starts by providing a short introduction to Ibn Taymiyyah’s life and the socio-political environment that shaped Ibn Taymiyyah’s world. As a scholar and reformer, Ibn Taymiyyah’s learning covers all the subjects of Islamic traditions and beyond. Interestingly, Sheikh includes other key elements such as Ibn Taymiyyah’s career, his relationship with the ruling class, and his many confrontations with the Ulama of his time. The most compelling point that Sheikh covers in the introduction is the relevance of Ibn Taymiyyah in the modern world; he notes ( 2020. pp.3):

Today, nearly seven-hundred years after his death in a prison in Damascus in 728/1328, Shaykh al-Islam Ibn Taymiyyah remains one of the most intriguing of the classical Islamicate thinkers. This is because, despite the breadth and depth of his intellectual legacy, he is more often than not identified as the intellectual forbearer of contemporary Islamic radicalism and militancy, especially since 11th September 2001

Reading the introduction not only highlights the background of Ibn Taymiyyah but in a sense prepares the readers to understand and appreciate Ibn Taymiyyah from a new dimension. Chapter one starts with Ibn Taymiyyah’s discussion on the Islamic understanding of onomastic (2020. pp.6)

Let us not turn ourselves away from the names with which God has named us for the names that some people have invented, that they have to give, they and their fathers, and for which God never sent down any enabling authority.

Commenting on what Ibn Tayymiyyah said above, Sheikh highlights that ‘the act of naming has a force of its own. While it [name] has the power to elevate, it also has the power to debase’ (2020. pp.6). Here, in the commentary Sheikh paves the way for the unification of Muslims. If we start to refer to ourselves with the name that Allah (may He be exalted) called us with (i.e. Muslims), then our standing on the world stages would have been one of respect and honor. However, much of the division between Muslims is largely due to differences in names, which have no authentic basis. This naming has created animosity and deep-rooted hatred between us. This has made us forget the basic principle of Islamic teaching that: ‘the most noble of creatures in the sight of God is the one among them (regardless of which group) who most fear Him’ (2020. pp.8).

Using a similar format, Sheikh covers the rest of the thirty-three qawaid such as Paradise, communion and division, innovation, real love, belief as an instinct, sincerity, sins, etc. Sheikh’s commentaries in each of these thirty-four qawaid take a realistic, rather than idealist approach. Such realistic commentary, if understood correctly, has the power to influence and change our current state.

In a world that seems to have forgotten or misunderstood the importance and piety of the salaf, Sheikh concludes the book with a chapter entitled The way of the salaf.  In a similar style to previous chapters, Sheikh, quotes Ibn Taymiyyah saying: ‘A mistaken and misguided innovator is he who judges the method of a scholar or jurist, or the path of an ascetic or hermit to be better than the way of the companion’ (2020. pp.110).

Furthermore, Sheikh’s choice of Ibn Taymiyyah’s above statement is appropriate to end the book. Misunderstanding the role and status of the salaf has caused great harm to the contemporary Muslim world. The dysfunctionality of Muslim societies stem from blind-traditionalism, blind-Sufism, and blind-Modernism, all such paths are purely based upon ignorance.  Sheikh argues ‘that every Muslim ought to know that the best speech is the revelation of God, the best guidance is that taught by the Prophet Muhammad and the best generation is that to which the Prophet was sent’ (2020. pp.110) .

The above statement of Ibn Taymiyyah lays down the principal benchmark for the correct understanding and applications of Islamic teachings in all areas of human interactions. Sheikh’s present volume is a vital contribution to the modern Islamic world, offering a grounded understanding of Ibn Taymiyyah’s life and teachings from a new perspective in the English language. The historical Ibn Taymiyyah is very difficult to understand, considering much propaganda – both for and against him – has been documented. Sheikh not only presents some of  Ibn Taymiyyah’s writing in a balanced and moderate manner but enhances it with an intelligently refreshing commentary and a practical applicability.