Muslim-Christian Engagement in the Twentieth Century 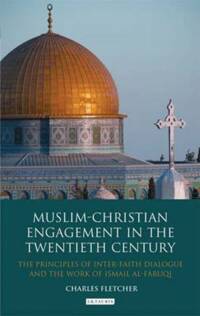 Ismail Raji al-Faruqi (1921–1986) was an encyclopedic scholar of Islamic studies in the modern age. He along with his three Muslim academic friends and colleagues viz., Fazlur Rahman (1911–1988) and Seyyed Hossein Nasr (b. 1933) was a trailblazer in Islamics or Islamic studies both in the East and West.

Since the 1960s onwards, al-Faruqi of the Temple University, Fazlur Rahman of the University of Chicago, and Nasr of the George Washington University were the first three prominent scholars of Islamics in the West. It was an era during which Muslims were making their appearance in the field of study, research, and

discourse in Islamic and comparative religion studies in Western universities. Each of them made his specialised contributions, Fazlur Rahman to Islamic thought, Nasr to mysticism and al-Faruqi to the study of Islam in the area of history and phenomenology of religion, though he is famously known for his contribution to the theory of Islamisation of knowledge.

Charles Fletcher’s Muslim-Christian Engagement in the Twentieth Century comes as a refreshing reminder of the contribution of al-Faruqi to the activity of Muslim-Christian dialogue immediately following the end of colonialism and beginning of the postcolonial era.

Al-Faruqi’s engagement in Muslim-Christian dialogue was an academic, theological, and activist undertaking, having important implications for the future of Muslim-Christian relations at both the local and global levels.

Unlike the populist Muslim preachers and dialoguers of Islam, al-Faruqi engaged in deep dialogical discourse, highlighting the religious core of the ancient Near Eastern religions of Judaism, Christianity, and Islam, the trio representing “the Arab stream of being.” He saw the three traditions as representatives of the unity of the Semitic tradition with each of them passing through different developments and also as heirs to the ancient religions of Assyria and Babylon. In his view, the monotheistic perspective of the world appeared in history in the form of Arab religious humanism expressed in the Jewish, Christian, and Muslim forms of monotheism (i.e., religion in the Arab mind). Thus monotheism is the religious gift of the Arabs to humanity at large.

As per al-Faruqi, the interreligious dialogue between Christianity and Islam should start off with the Nicene creed. It should also take into account the ethical insights of the modern man who holds life-affirming views, for whom the notion of justification is insufficient, and whose moral mission worldwide remains unfulfilled.

Al-Faruqi joined the interreligious dialogue movement at the time when it was in its infancy and engaged in by few Muslims. He initiated Islam into interreligious dialogue in contemporary age and as time passed others joined in and this legacy of his continues until today. From the Christian side, it has been remarked that “he has left much for Christians to ponder, and his efforts stand as a monument to one person’s vision of what we all would long to see: a world community working in harmonious relationship to God and to each other.”

Fletcher’s Muslim-Christian Engagement in the Twentieth Century is the product of his PhD dissertation submitted to the Institute of Islamic Studies,

McGill University, a place where al-Faruqi was a visiting professor of Islamic studies during the years 1956–1961. While at the Institute, he also studied Christianity and Judaism at McGill’s Faculty of Divinity. Thus, the book comes as a fresh breath of air and reminder of the great and systematic contribution of al-Faruqi to Muslim-Christian engagement, an undertaking by a passionate Palestinian Arab Muslim well versed in the deep knowledge of the three Semitic religions of Arabia. The book is based on first-hand research work. The author benefitted greatly from having gained access to the original works and writings of al-Faruqi housed in the library of the International Institute of Islamic Thought (IIIT) of which al-Faruqi was one of the founders. The book is divided into three parts. The first  part  delves  on  the biography and the intellectual development of al-Faruqi. The second part sheds light on important dialogical concepts, which al-Faruqi developed in the areas of methodology of interreligious dialogue and discusses the principles he founded in the study of religion such as “Meta-Religion” and the responses to it by his supporters and detractors with whom he engaged in a passionate but intellectually profound debates and discussions. The third part of the book illustrates al-Faruqi’s unique and admirable contributions to building meta- religious principles for interreligious dialogue. These principles are as follows:

(4) correspondence with reality must exist; (5) freedom from absolutised scriptural figurisation; (6) dialogue should be conducted on areas where there is greater possibility of success, such as ethical values (p. 196).

These  pre-9/11  Faruqian  principles  of  interreligious  dialogue  remain relevant until today and need to be implemented. Adopting these principles will go long way in building understanding between religions and also show that dialogue is a serious activity and not merely engaging in “goody-goody” talk shows the while inter- and intra-religious relations are mired in persecution, violence, lynching, and assassinations in the name of religions around the world.

distortions, and mission. As per al-Faruqi, dialogue can only take place in the environment of mutual trust. He envisioned that his Muslim students like the present reviewer, and non-Muslim students like John L. Esposito, a Christian, and others would take courses in studying religions to which they do not belong; this would enable them to obtain a deep and thorough understanding of the Middle-Eastern and Asian religions, preparing them for the task of living and engaging with other faiths while being firmly rooted in their own traditions. In this way, al-Faruqi contributed to the study of religion by enabling his students to appreciate and engage with other religions for the task of building interreligious understanding and peace. In this endeavor, he adapted Muslim epistemology for changing times.

Fletcher has produced an excellent and much needed book, which is very much relevant to our times. He considers al-Faruqi “the pioneer among modern Muslims who learned about and sought to engage the other” (p. 209). He also comments that over the decades of engagement in interreligious dialogue al-Faruqi succeeded in formulating his own principles of dialogue, which were “rational and useful in creating the structure and opportunity for interfaith communication. However, for others his methods were less workable” (p. 208). The reason for this was that “he avoided the opportunity to build upon the critiques of the non-Muslims he had engaged by revising his methodology and not just his applications” (p. 209). For Fletcher, al-Faruqi moved back and forth defending Islam and challenging Christianity and Judaism without finding a common ground to build on.

The book is full of copious notes and references along with an excellent bibliography of al-Faruqi’s contributions to the study of religion and interreligious dialogue. The book shows that though time has moved and the nature of interreligious dialogues has changed in recent decades, al-Faruqi’s contribution to and his role in the development of systematic theology of dialogue cannot be ignored for a long time to come.

This book will draw the attention of both the general  public among whom al-Faruqi remains a famous name and interreligious dialogue specialists interested in study and research about the history of Muslim dialogical activity in its different shapes and forms in contemporary times.