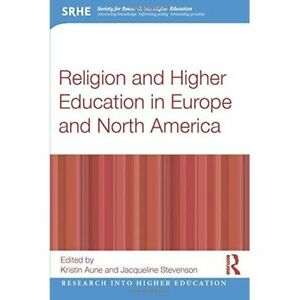 The following paper critically reviews Virkama’s (2017) Invisible Islam: Muslim student migrants’ everyday practices in French secular universities. The chapter is taken from Aune and Stevenson’s compilation: Religion and Higher Education in Europe and North America (2017). The selected chapter has been chosen for its relevance to contemporary issues and to current students’ experiences. The study is qualitative in nature and highlights the religious student experience.

As previously mentioned, the chapter ‘Invisible Islam: Muslim student migrants’ everyday practices in French secular universities’ has been taken from a collection of research articles this year focusing on the religious experience of staff and students within the higher educational context. In particular, Anna Virkama’s chapter highlights the complicated negotiations that manifest between the construction of identity and context, which differ markedly for each individual. Virkama’s research originally formed part of her PhD thesis whilst also contributing to a far greater, multi-level research project analysing migrant transnationalism.

An overview of the chapter

Virkama’s chapter is constructed around the topic: ‘the student migrants’ everyday practices related to religious activities’ (p.90). It draws on qualitative data gathered from her thesis on migrant transnationalism among Moroccan migrants in France. Considering the exploratory nature of Virkama’s research, a solely qualitative approach is employed; adopting ‘in-depth, life-course interviews’ as the primary source of data and additionally relying on field-notes from her observations (p.92).The study has been influenced by the researcher’s travels to Morocco and first-hand experience of Moroccan University campus life. Virkama’s intercultural experience appears to be the main motivating factor behind the research.

The research explores the impact that French secular university campus life has on Moroccan Muslim students; particularly focusing on their religiosity and how they adapt their religious practices whilst studying in the non-Muslim context. The paper calls for two main re-evaluations. Firstly, the need to develop and expand the vocabulary used by academics to describe Muslims. According to Virkama the simple dichotomy of “radical/moderate” does not accurately describe the lived experiences of European Muslims which according to Tariq Ramadan ‘risks further alienating Muslim citizens’ (2017). Secondly, Muslims should not be seen as a homogenous religious group in which there lies no variation in religious practice. Therefore, the invisible Islam that Virkama’s research aims to highlight ‘is a Muslim faith practiced in private, and which adjusts to the conditions of mainstream society’ (p.106).

Although this research positively adds to the existing literature on intercultural/interreligious activity and further develops a richer understanding of Muslims in Europe, the following review will focus on two problematic themes. Firstly, it will explore the notion of what it means to be a ‘practicing’ Muslim and the method Virkama utilises to determine students’ religiosity. Secondly, Virkama’s understanding of what constitutes the five pillars of Islam will be analysed. Each section will discuss the potential impact that the themes have on the interpretation of data and the conclusions drawn.

For a researcher, attempting to set the boundaries of what defines religiosity is problematic due for a number of reasons. Recent studies concerned with exploring student religiosity have chosen to ask participants to ‘self-identify as religious when gathering data (see Stevenson, 2014). This is markedly different from Leak et al.’s (1999) approach that aims to provide a global measure of religious maturity using the Faith Development Scale (FDS).

Although Virkama’s research recognises the difficulty of defining religiosity, it takes an approach that focuses on the ‘tangible, ‘visible’ aspects of Islam [… as they] can mark the difference between Muslims and non-Muslims’ (p.92). However, an approach that places the emphasis on items such as ‘dietary restrictions, vestimentary codes, and relationships between men and women’ (as a measure of religiosity), risks conflating Moroccan culture with religious practice or the Moroccan peoples’ interpretation of Islamic practices. For example, Virkama’s linguistic play on the Shakespearean line “To be, or not to be” appears as ‘to veil, or not to veil’ (p.102) and should have continued, “that is the question: Whether ‘tis” an obligation in Islam or whether veiling is part of female religiosity; or more importantly, how the veil impacted the lives of the participants in the research. Furthermore, neither the wearing of the veil or the headscarf seems to play any apparent role in the students’ lives as none of the women who took part in the study ‘wore a veil or a headscarf’ (p.102).

The main dispute at this point seems to be between having a list of outwardly defined religious actions, versus the way religion (personal faith) impacts students’ day-to-day lives. Therefore, an approach focusing on what religiously matters to students would be more authentically accurate.

A close examination of the research reveals several inaccuracies. The following section will identify them, offer an explanation to why they may have occurred and discuss the impact they have had on the analysis.

The first inaccuracy is regarding Virkama’s addition to the constituents of the five pillars of Islam; namely the idea of ‘eating halal’ (the consumption of lawful foods) which is not a pillar of Islam (p.96). This focus may seem pedantic; however, if the five pillars of Islam have been used as a measure of religiosity, then this helps to explain why Virkama is surprised to discover how ‘flexible’ students were about eating non-halal meat. The ‘flexibility’ displayed by the students may signify non-religious attitudes, especially if ‘eating halal’ is set as a pillar of Islam. One possible way to expand the study could be to cross-analyse transnational Muslim migrants’ religious practices between the country of departure and the country of arrival. Such research might highlight the use of Saudi based fatwas in European countries. For example, ibn ‘Uthaymeen’s widespread fatwa permits Muslims in Christian majority countries to eat non-halal meat; excluding pork (see Risaalah fi Ahkaam al-Udhiyah wa’l-Dhakaah for the complete fatwa).

The second inaccuracy: The pillars of Islam

The second concern is in the way Virkama defines the five pillars in English as this tends to be an obscure mixture of single nouns, verb phrases and two Arabic terms which linguistically leads to infer that Islam has no English equivalents for its religious terms. For example, she lists the first pillar as ‘fast’ which is misleading because the word fast is decontextualized; it could either refer to the verb fast or an adjective such as the fast car. Neither interpretation explains what ‘fast’ or more accurately fasting (in Ramadan) means. Confusingly, in the same parenthesis which she uses to define the pillars of Islam, verbal phrases are used to clarify the remaining pillars.

In order to illustrate the above concerns, the following is the original list: ‘fast, prayer, eating halal, giving zakat, Hajj -the pilgrimage’ (p.96). The discrepancies are better highlighted when compared with the actual pillars of Islam chronologically (Khan, 2009): (1) the testimony of faith, (2) prayer, (3) paying alms (zakah), (4) the pilgrimage (Hajj) and (5) fasting (during Ramadan). The absence of ‘eating halal’ in the above highlights how Virkama’s understanding of Islamic religiosity may have been incorrectly formed.

The main plausible explanation to the above inaccuracies appears to be that Virkama’s understanding of Islam is deducted from her interactions and conversations with Muslim students instead of an academic study of the religion. This lack of proper study could clarify why she amalgamated the consumption of halal food – an important part of Muslim law – with the five pillars of Islam. Scholars who study in a time and place where Islam is frequently misunderstood have a greater responsibility to gather information from respected academic sources and to present the tenets of the religion accurately and objectively.

Adherence to the principles of academic research would give the author more credibility in discussing the diverse lives of Muslim students and the diverse interpretations of the five pillars as understood by religious scholars and by the laity. Without proper research, academics can propagate misinformation and foster prejudice against minority groups.

Future research should approach studying religiosity with caution and place less of an emphasis on the ‘tangible’ and ‘visible’ aspects of Islam; if not, it risks conflating culture with religious practice or peoples’ interpretation of Islamic practices. Additionally, possible future research could take an approach that focuses on what religiously matters to students.

Alaa Dean Alzalam loves studying and has spent around 15-years pursuing higher education. He has spent several years studying traditional Islamic sciences and the Arabic language in the Middle East as well as teaching English in the Gulf region. At present, He teaches English for academic purposes and helps prepare international students for English proficiency examinations. In his spare time, He enjoys traveling to new places, exploring nature, and practicing calligraphy.
He has been awarded MA (TESOL), Master’s in Education (MEd), PGCE, and PgCert -- as well as an HND and BA (Hons) in T.V, Film, and Creative Media.