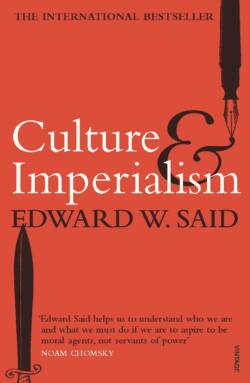 “They weren’t like us and for that reason deserved to be ruled.”

Culture and Imperialism is the natural extension to his Orientalism. However, this study focuses, as mentioned above, on the indirect relationship of the colonisers with the colonies to continue their rule. In other words, although the empire does not exist in its physical sense, the former colonies continued to be colonised.  Said looks at these phenomena by studying the literary works of the colonial writers from the 18th, 19th, and 20th centuries, and whilst doing that he makes references to three major metropolitan cultures, namely British, French and American cultures. For example, Said notes quoting Richard Van Alstyne’s work The Rising American Empire:

“[America] was from the beginning founded upon the idea of an imperium–a dominion, state or sovereignty that would expand in population and territory, and increase in strength and power.”

Said argues in favour of a strong link between culture and imperialism and it is this link that allows the Western world to have a monopoly over the so-called third-world countries.  He notes in his introduction:

“The power to narrate, or to block other narratives from forming and emerging, is very important to culture and imperialism, and constitutes one of the main connections between them.”

Said argues that over the centuries Western literature, ranging from novels and autobiographies to travel literature, has helped to either consciously or unconsciously maintain the empire and keep alive the notion of the Western superiority complex.

Many novels and literary works have been studied and analysed by Said to conclude a pattern of behaviour that represents a strong imperialist attitude towards the developing world. Those novels not only endorse the imperialist worldview but in many cases see it as necessary. Take for example Heart of Darkness by Joseph Conrad. The novella follows the journey of Charlie Marlow, a British sailor working for a Belgian company trading in ivory. Marlow witnesses the brutality the natives experienced under the colonisers and he shows some resistance to such brutality, but he indirectly not only promotes imperialism but portrays Africa as a dark place devoid of progress, development and success. Marlow sees imperialism as the theme of its time. In other words, imperialism is part and parcel of living reality. Said notes:

“Although the almost oppressive force of Marlow’s narrative leaves us with a quite accurate sense that there is no way out of the sovereign historical force of imperialism.”

Said also draws a similar conclusion with other literary works such as Charles Dickens’s Great Expectations which, although set out to highlight moral standards and how their viewed, fails to acknowledge the suffering of the Aboriginal Australians. Said points out:

Such work sees colonisation in one way or another as something necessary and good for the natives. The Westerner has the sole right to colonisation and its right to colonisation is promoted by popular novels that play the mouthpiece of the politicians and shape public opinion. The book also discusses the aftermath of pro-colonial literature and highlights the birth of new and exciting works from writers, novelists, and filmmakers that make a counter-argument to the colonial literature. Said says:

“…after the massive intellectual, moral, and imaginative overhaul and deconstruction of Western representation of the non-Western world, after the work of Frantz Fanon, Amilcar Cabral, C.L.R. James, Walter Rodney, after the -novels and plays of Chinua Achebe, Ngugi wa Thiongo, Wole Soyinka…and many others…”

These writers, unlike most colonial writers, are now viewing colonial literature as not something they should feel or express sympathy to or toward, but as deserving criticism.  In this regard Said quotes Frantz Fanon:

“We should flatly refuse the situation to which the Western countries wish to condemn us. Colonialism and imperialism have not paid their score when they withdraw their flags and their police forces from our territories. For centuries the [foreign] capitalists have behaved in the underdeveloped world like nothing more than criminals.”

Culture and Imperialism shows the multi-masks the Westerner, including its literary figures, wears to be in control, covering its real face, one that is greedy, brutal and merciless and one that will show no self-restraint. The book seeks to demonstrate how colonisers still have the appetite for power and control of their former colonies.

After reading this book, I realised, the Cultural Imperialism that is taking place today, including over those Muslim countries who boast that they were never colonised, is mind-boggling. For years’ religiosity shined on such countries only for it to be revealed that it was only a mask that was being worn.  The mask worn by many was manufactured by the colonisers with the help of some self-centered leaders whose only ambition was like the ivory in Heart of Darkness. All Islamic values and prophetic traditions are nothing to such people except a tool for personal gain.  It seems now that it isn’t just leaders wearing a mask but the religious intelligentsia, many of whom wear this mask of pretence, all the while attempting to hoodwink the general masses into believing that they are something they are not. How do we blame the colonisers for their Cultural Imperialist project when the problem lies within. Like the poet once expressed,

Allah (may He be exalted) said:

“Whatever misfortune befalls you is a consequence of your deeds.”

It is time now, as young Muslims, to engage with our tradition and culture and reproduce what was once an example for that coloniser. We can only do this by taking the Islamic tradition as a framework, analysing colonial and post-colonial literature, and producing an alternative narrative to challenge such false narratives and free Muslims and their leaders from intellectual slavery. It is time to tell our story, lest the statement of Chinua Achebe become a living reality:

“Until the lions have their historians, the history of the hunt will always glorify the hunter.”