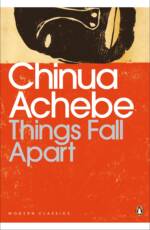 “Your new-caught, sullen peoples,
Half devil and half child..”

“With bullets, blood or death,

Better by far defend it”

Rudyard Kipling’s poem The White Man’s Burden is not only a one-man world view but rather it represents a nation with a pure racist soul. There had been many works like that of Kipling, such as the Heart of Darkness by Joseph Conrad.  Conrad viewed Africans  as “uncivilized and savages.” As Achebe himself pointed out in “An Image of Africa: Racism in Conrad’s Heart of Darkness“. The West viewed the ‘Others’ who needed salvation, even if that salvation needed to be done with the gun.

‘Things fall Apart’ by Chinua Achebe is a postcolonial novel written through the eyes of Africans to show that contrary to popular belief, Africa and its people were highly sophisticated and developed a working system that is functional and acceptable within their culture. It represents Africans as happy people and living within societies that are built on internal traditional values and social principles.

The book is divided into three parts and follows the life of Okonkwo from a fictional clan of Umuofia.  Part one describes Okonkwo’s family, its tribesmen, history, culture, customs and the social structure of the Umuofia people. It shows in great detail how the Umuofia society was highly developed, with its unique laws and customs. Part two and three highlight the colonialism of Umuofia by the British and how it changed the very structure of its society. Okonkwo, who is the main character in the novel, tries to retain the traditional religion and culture from the influence of the British. However, with religious ‘superiority’ and the eagerness to pull the trigger the white man quickly dominated the Umuofia society, and not only does the white missionary enter Umuofia’s village but they also enter the house of Okonkwo by converting one of his sons. This was a slap on Okonkwo’s face.

Okonkwo is a very proud man with a reputation as a warrior and was a chieftain of his village and tribe, a position he attained with great sacrifice and suffering, and finally was in the position to lead. The idea that societies cannot function without British enlightenment was one of the motives behind colonisation. The missionaries confronted Okonkwo’s leadership without any mercy. They also started to build churches intending to propagate Christianity and official administrational departments intending to control the people. The missionaries had the Bible and the official officers had the gun; they were the two hands of the same body.

Okonkwo, being a self-respected and brave man, could not accept such humiliation and tried gathering men of the villages to fight the British but rare were men like Okonkwo in any villages. Okonkwo, who failed to gather men to fight along with him, pulled out his machete and struck one of the soldiers to save what was left of his honour. He knew the consequences of his action and what he must do to avoid being humiliated by the British. The novel ends with Okonkwo hanging on a tree; lifeless.