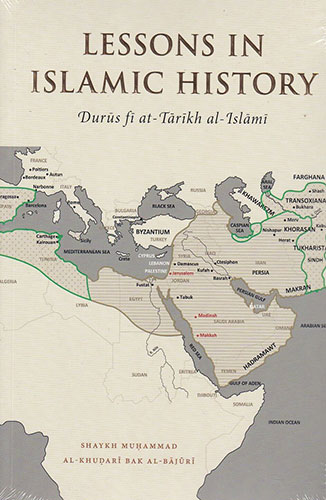 “A community receives light from its history. And it becomes aware of itself by the remembrance of its history”.

One of the salaf said, “We learned Islamic history just like we learned a surah from the Quran”.  The importance of studying Islamic history cannot be overemphasized, especially in our post-modern era.  Lessons in Islamic History is the English translation of Durus fi al-Tarikh al-Islami by Shaykh Muhammad Al-Khudari Bak Al-Bajuri (1872-1927).

Lessons in Islamic History is divided into forty-six lessons.  A color-coded map of the areas that were ruled by the major Islamic dynasties is provided at the end of the book.  It also provides an index from page 233 to 245 and at the end of the mention of every dynasty’s history, a genealogical map is also provided in black and white print.

The book starts its history from the time of the pre-Islamic Arabian Peninsula down to Abbas Hilmi II (1874-1944).  It covers the life and time of our blessed Prophet (may Allah’s peace and blessings be upon him), the lives of the four rightly guided Khulafa and all the dynasties and their rulers, along with their religious-socio-political achievements.  The author gives special attention to the history of Egypt, his native land, covering all its rulers, including Muhammad Ali Pasha (1769-1849) and Napoleon Bonaparte (1769- 1821) and their method of ruling the country.  It also sheds some light on the conditions of the general public and the suffering they were under.

Although the book is a summary of the subject, it nevertheless provides sufficient information to help one begin one’s journey to discovering the vastness of Islamic history.  The author at times provides his understanding of the reasons behind the success or failure of a dynasty.  For example, after talking about the history of Andalusia, the author notes (in page p.108) “They continued in this manner until Satan came between them, turning them against one another in pursuit of delusive power.  Thus, they split into factions, leaving each city with its own commanders….”.  The author further notes, “in such circumstances, truthful advisors [the ulama] recoil and sincere counselors hide.  Only those who cheated and betray are successful…”

The translator has used standard and basic language but has kept all the names of personalities and places in their original format.  It is a fairly easy read and follows a chronological system, linking one chapter to the other which helps one to map the development of Islamic history.