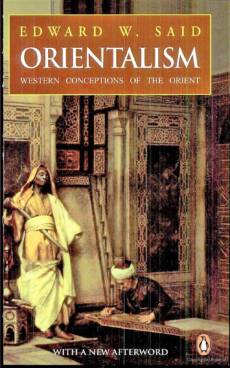 “Arabs, for example, are thought of as camel-riding, terroristic, hook-nosed, venal lechers whose undeserved wealth is an affront to real civilization. Always there lurks the assumption that although the Western consumer belongs to a numerical minority, he is entitled either to own or to expend (or both) the majority of the world resources. Why? Because he, unlike the Oriental, is a true human being.”

On June 13, 1910, Arthur James Balfour gave a speech in the British Parliament that really highlights the relationship between the oriental and occidental. He says, “Is it a good thing for these great Nations – I admit their greatness – that this absolute government should be exercised by us? I think it is a good thing. I think that experience shows that they have got under it a far better government than in the whole history of the world they ever had before, and which not only is a benefit to them but is undoubtedly a benefit to the whole of the civilised West …. We are in Egypt not merely for the sake of the Egyptians, though we are there for their sake; we are there also for the sake of Europe at large.”

Balfour and others like him were not an isolated voice within, then the British Empire, they were a class of elites who has taken upon themselves the sole responsibility to govern and ‘civilise’ the oriental world. For those voices to echo freely and openly, a serious study of the oriental world was needed. As a result, the oriental lands became the main focus of the Western scholarship and over time many books, articles, paintings and films were produced to represent the Orientals because, to use the Marxist lines, “They cannot represent themselves; they must be represented”. How this representation took place and what theories were developed by the West to represent, or rather misrepresent, the Orients is the subject of Orientalism. Published in 1978, the book aims to decode and explain the false representation and theories that were developed by Western scholars of the Orients.

An extract from Macat Analysis illustrates the main thesis of Orientalism: imagine an academic professor writing an academic paper on a party scene. The professor decided to go to a party. Once the professor enters the party room, he sees people dancing, kissing, hugging and playing heavily loud music. The whole scene is alien to the professor because he had his own sets of values and principles. The professor finds it difficult to appreciate or understand what he is witnessing. The professor cannot identify himself with the partygoers or understand what made them who they were. In the same way, Said argues that Western scholars studied the Eastern culture they did not understand it because it differed from their culture so they portrayed the East as something exotic, enigmatic, curious and hidden.

Therefore, they judged it and romanced it without ever really understanding it. Deep down the professor feels and thinks that his culture and value is justified.  After all, he is an academic and cultured and sophisticated. His distaste for the party and its people confirms to him that his culture and lifestyle is the only way and the accepted way. He publishes his report about the party and its people as sensual, rockers, unintelligent and stupid because the partygoers have deviated from the professor’s values and culture. Just as the professor saw himself as superior to the partygoer, Said believed that the West believes its societies were more superior to Eastern societies. Not only that, the book argues, but the Western scholars had strong ties with imperialist societies, thus concluding that much of the Western scholarship is inherently political and intellectually dubious. Said further argues that stereotyping of the oriental becomes a justification for its colonisation. The West painted a picture of the Eastern world which needed to be civilised. Thus, invasion was termed as salvation, rescuing the inhabitants who were too lazy and too pleasure-focussed to govern themselves.

The book has three chapters, each having many sub-headings. Chapter one focusses on analysing the scope of Orientalism such as knowing and understanding the oriental and how the West imagined the so-called oriental geography and how it was then represented as an inferior subject to be studied and also to profit from. The second chapter, Orientalist Structure and Restructures, along with chapter one, can be considered the most important chapter. It is here that Said looked into the many methods used to redefine the oriental, although this redefining does not include the native narrative.  Rather, a Western secular world view is imposed on the Orients such as the theory of  social Darwinism which used to show how the West had developed faster than the Oriental, which ‘obviously’ indicates to the biological superiority of the West. It also analyses the works of major Orientalists of the 19th century and shows how those works laid the foundation for later Orientalists. The last chapter is called orientalism Now and is devoted to expounding the political relationship between the West and the East.

The modern orientalist scholars have more access to empirical knowledge of the Orient, unlike the scholars of the past. However, this empirical knowledge did not change the old Orientalists’ theories. The new scholarships only gave more complexities, sophistication and economic value to the old age Orientalists’ theories. This chapter also shows how the studies of the orients shifted from the Europeans to the new world empire; the United States of America. All the three chapters contribute in some form or shape toward establishing Said’s above-mentioned thesis.

A full ‘access’ to the book can be limited to the general public due to its technical, literary and historical references; thus to fully appreciate Said’s thesis and contents, one will need a fair amount of subject knowledge. Orientalism is no doubt a masterpiece and has and will influence future generations. Orientalism must be on the shelves of every public and private library of the Muslims.