In the Hands of the Taliban

HomeSubjectsTravel/MemoirsIn the Hands of the Taliban 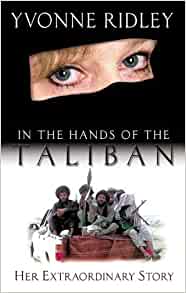 Some may say the narrative by the British journalist Yvonne Ridley presented in “In the Hands of the Taliban” is merely a classical manifestation of Stockholm Syndrome.  A superficial reading of the book may lead one to believe this claim is true but a deeper reading reveals the existence of a transcendental relationship. The Taliban and Afghanistan had just become a mere harvesting ground of a discovery that was soon to change the world view of Yvonne Ridley.

In the Hands of the Taliban is the memoir of Yvonne Ridley’s experiences with the Taliban and their government in Afghanistan.  The unfortunate event of 9/11 has reshaped our contemporary world.   To some, 9/11 became a free market to profit from while to others, 9/11 was the waiting reality of Huntington’s clash of civilisations but to our young ambitious Ridley (2001. pp.3) “this was [a] terror on an unbelievable scale, the biggest story since the assassination of JFK”. With this in mind, she set out for America, but as fate has it, she was asked by the editor of the Sunday Express to go to Pakistan since it was soon to become the hub of international attention.

Her story of being captured by the Taliban in Pakistan and finally to her release fills the twelve chapters of the book with adventures, fears, and many discoveries. The book is narrated in the first-person form, where Ridley consciously and fluently switches from her present to her past and in some cases into her future. Along with the book being a memoir, it can also be considered an autobiography. In almost every chapter can be found some mention about her life, her many relationships, and her daughter, who at that time was in a boarding school. The reader will, a few pages into the book, quickly discover Ridley’s personality, habits, and experiences, which are typical of a typical western woman’s lifestyle. One thing, however, that stands out is that she had some basic knowledge of the Arabs and Muslims and their culture. This knowledge, the book reveals, was due to her marriage with a Palestinian man with whom she had her daughter.

The book gives the reader a glimpse into the westerners’ knowledge and experiences of what the late Edward Said calls the “Others”. Her knowledge of the Muslim world and Islam was purely based on a western world view. The ‘Others’ were simply seen as uncivilised with a premature legal system. Westerners thought Muslims took the death penalty in Islamic law as entertainment and that it is carried out for the ‘slightest misdemeanor’ (Ridley 2001).

With this mindset and personality, she enters into the modern woman’s worst nightmare; she wears a Burka and becomes invisible, losing her womanhood, with all its rights (Ridley 2001), and travels to report from the world’s most ‘religious fundamentalist country’. From chapter six to chapter nine, she records and retells her experiences with Afghani people and, most importantly with the Taliban. At this point, the reader will notice Ridley’s political views are being expressed. Ridley can now see the faces of Afghani people and feel their fears and hopes. She finds the Afghanis to be a strong people. (2011. Pp.101) “Women from the Kama were strong, spirited and resilient…one woman, who had the most amazing almond-shaped, hazel eyes and magnificent cheekbones, gently mocked me when she asked if I had any children and I said ‘one’…putting her hands on a fine pair of child-bearing hips she mocked me; “Only one? Ha! You British and American women can only produce one or two children but I can have fifteen, and when you run out of your boy soldiers to send to war we will have many replacements”.  The book gives a very short history of the Taliban’s movement, which according to her had a good beginning.

It is argued that the Taliban are backward people. However, the book reveals that they have characteristics that are very admirable. Such noble characteristics are covered in the final few chapters of the book, albeit done in a very subtle way. Whilst talking to Paul, one of Ridley’s colleagues, they note (2001.pp  185) “He asked me what I really thought of the Taliban and I said, ‘It’s very difficult because we know they’re brutal and yet they treated me with kindness and respect…He agreed, adding “No, people won’t like it, but I have to say they were honorable. They gave an undertaking that you would be released and they stuck to their word. They came across as having their own kind of integrity. Richard [Desmond] gave me an open cheque to get you out but I knew right from the start that offering them money could cause great offence.”

Ridley, in the last parts of the book, presents a different narrative of the Taliban, a narrative that is often hidden from the general public. The Taliban, in her view, turned out to be caring, honorable, and having very high moral values, which led her almost to confusion and to questioning her culture and traditions. In a number of places in the book, she recalls events where she felt like she had the upper hand over the Taliban.  For example, she had her own keys and officers would only come into her cell with her permission (Ridley 2001). Contrary to the force-feeding that takes place in many countries when the prisoner goes on hunger strike, Ridley’s hunger strike was a great concern for the Taliban, and not because of any political gain, but rather because of genuine concern.  Ridley’s complaint about the condition of the prison was taken so seriously that she was then offered a room of her own.

The last three chapters recall her release and the aftermath of her experiences. Ridley found herself in between two opposite worlds, one that is apparently evil, backward, and uncivilised and yet has high moral qualities which are admirable, and the other one that is civilised, sophisticated, and advanced, and yet its social fabric is questionable. (2011. pp.204) She notes that “In complete contrast to these entertaining anecdotes, after 10 days of being treated with respect and courtesy by my captors I was shocked when I got a black cab in London. The East End driver recognized me. [He asked] You’re that bird that got locked up by them Taliban people aren’t you? I nodded and he continued. Did they rape you? ‘I shook my head and then he added: ‘It’s hard to believe. If I’d been  out there I’d have given you a go.”..I couldn’t believe it….Welcome back to civilization, Yvonne, I thought.”

Whilst in prison, Ridley made a promise with one of the Taliban’s clerics that if released, she would read the holy Quran. This promise played a great role in securing her release. Keeping this promise, Ridley started to read the Quran and began asking questions about Islam, especially to do with issues regarding women. And this all led to her falling in love with Islam and becoming a Muslim. Afghanistan, considered a wild, unforgiving country and a real nightmare for the ‘emancipated woman’ now had a new lover, Ridley, whose (2001. pp.215) “…heart has been stolen by Afghanistan…”