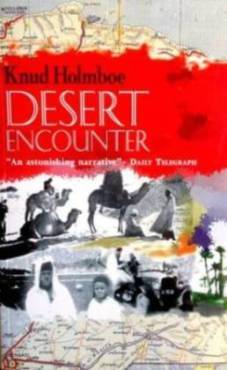 Desert Encounter covers the travels of a young Danish journalist and explorer Knud Holmboe (1902 -1931) who converted from Protestantism to Catholicism in 1921 and, after a sojourn in North Africa, ultimately converted to Islam in 1929.  The book records his journey to Algeria, Tripoli, Libya and finally Egypt.  It is a travelogue and an account of the social and political atmosphere that existed in North Africa under the colonialists.

In the Holmboenian era, the Muslim world was at the hand of the westerners, with the exception of few Muslim countries.  It was this atmosphere of control and subjugation that allowed westerners to travel freely and act as the master over the natives.  Morocco, Egypt and Libya were major victims to colonisation.  These countries mapped Holmboe’s journey.

Morocco was colonised by France from 1911 to 1956 and Libya was colonised by the fascist Italians under the leadership of Mussolini between 1910 to 1947.  This period of colonisation had totally killed off the spirit of the Muslim nations, save for very few souls, who chose honour over slavery.

Holmboe’s journey began from Morocco taking us through Algeria, Tripoli and into Libya, and finally Egypt, visiting some of the cities of these countries.  The greater part of the book introduces us to the deadly desert of North Africa, the desert Arab tribes and the fascist Italians.  It is in those areas one gets the real spirit of the book.  Holmboe was fully aware of the merciless desert when he set out but he desired travelling with the intention of becoming “the first man in the world to have driven through Africa from east to west” because of his intense interest “…in the Arab’s culture and way of thinking”  To his surprise, however, he discovered not only the culture of the Arabs and their way of thinking but also the culture and thinking of his fellow Europeans, who to the outside world presented themselves as the representatives of freedom, tolerance and cultured sophistication.  Through writing the book the author quickly discovered the opposite.  It was the natives who were the cultured ones and the barbarians were the Europeans.  Due to the favourable writings in support of the Arabs the book was immediately banned in Fascist Italy.  Holmboe had “no intention of writing an exposé of any” kind but was forced by his conscience to record the hardship of the natives under those barbarians.

Like many other travellers  Holmboe’s journey was one where he was accompanied by a number of different individuals, like Abdelsalm, Tarbox (an American), Hamid and, most significantly, young Muhammad, who was an asset to the journey due to his knowledge of the desert’s tribes.  Muhammad’s father was shot by the Italians and was well-known among the desert people.

The devilish behaviour of the Italians had created hell on earth for the desert people, whose wells were rendered useless by the Italian military and whose livestock was mowed down by machine gun fire, thus disturbing the natural system of desert life turning the welcoming nature of the desert people into one of suspicion and hostility.  Due to this, many travellers became unable to locate and use wells or the mainland.  Due to this, Holmboe and young Muhammad suffer for ten days in the wilderness with no water or food and survive by eating desert leaves and small animals.  At times, Holmboe was sure that death was just around the corner.

The book brings into light the life of the desert people who, according to Europeans’ narrative, were uncivilized without any understanding of real progress.  However, Holmboe found them to be the most educated and cultured people, who feared neither death nor any man but only Allah, and whose faith shined on their faces.  He said when he met six  Arab prisoners that “Their  faces shone with a sublime calm, as if they hardly knew they were in prison…I felt a deep admiration for these men from the mountain…”  The Italians’ propaganda about the desert Arabs, namely the Senussi members who were fighting the colonists, polluted the air.  Holmboe and some other Europeans kept an open mind to such propaganda and soon discovered that Senussi and other tribes had a legitimate case against the Italians.

To the Italians Libya was, as Abu Sharif points out, “[a] restoration of the heritage of the Roman Empire’s senatorial provinces in North Africa”. Thus, according to them (Italians) it was their legal right to take back their land from the rebels.  The book points out that Libya had become like Italy in terms of the symbols and rules being displayed in the streets being that of Italian fascist ones.  The inscription “those who are not of us are against us” found below a bundle of rods in a street sums this up.  The book revealed what would have otherwise been lost in history – the ugly side of Italian policies towards the natives.  Holmboe notes that about “thirty executions took place daily, which means that about twelve thousand Arabs were executed yearly, not counting those killed in the war…”  Most of those daily executions took place due to the mere accusation of feeding the so-call rebels.  Holmboe travelled from one city to another, all of which were under the control of the Italians and the only common thread linking each city was subjugation, oppression, humiliation and the terror that the natives faced daily.

As the book progresses toward the end, Holmboe became more and more convinced that the struggle for freedom of the Senussi members and other local tribes was legitimate and praiseworthy.  This feeling was soon discovered by the fascist Italians, which resulted in Holmboe being imprisoned and sent back to Benghazi.  In prison he was given no answers to any of his questions and he was asked to leave.  Here the journey through the desert comes to an end.  He does, however, go to Alexandria in Egypt to meet the Sidi Idriss, the self-exiled leader of the Senussi.  After a short conversation with the Sidi, Holmboe was offered a letter of recommendation by him to visit Kufra in Libya which was the only stronghold of the  Senussi.  Instead, Holmboe decided to  head back to “Demark, and temporarily abandon… an expedition to Kufra and the pilgrimage to Mecca”.

On the boat heading “towards the luxury and comfort which civilisation has created” he “gazed at the African coast receding slowly from sight…’ and his heart ached for the poor, hardy people whom he had learnt to know.  Holmboe ends his narrative with a pointed reference to Kipling:

“Surely Kipling was only superficially right when he said ‘East is east and West is West’.  Deep down within themselves the people of the East and the West are alike.  They are two branches of the same tree.  And

when man, regardless of whence he comes, seeks deep in his heart, he will feel the longing for the root of the tree”.

After completing the book, Holmboe travelled as a pilgrim toward the holy city of Mecca.  In circumstances that were never fully explained, he was murdered just south of Aqaba on October 13, 1931.