Return of the Pharaoh 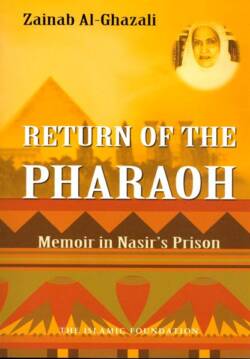 Huda Saharawi (1879-1947) was Egypt’s famous feminist, who gave birth to the Egyptian Feminist Union (EFU) in 1923 to fight the so-called male-controlled society and establish an equal platform for the women of Egypt. Its aims were also to redefine or even reject some of the Islamic teachings and values concerning women. Many young and intelligent women were attracted to the EFU, whose worldviews and futures were built on the ethics and morals of Europeans. EFU created a generation of Egyptian women, who [according to EFU] are independent, strong, and free thinkers. In reality, EFU was nothing more than a branch of the Western feminist movement. EFU was fighting an enemy that only existed in the West. Huda Saharawi was culturally a French woman, who just happened to be born in Egypt.

Our young and youthful Zainab Al-Ghazali Al- Jubaili (1917-2005) answered the call of EFU and became a member of the organization but soon discovered the true face of EFU and, as a result, she renounced her membership and declared in confidence that “Islam gave women rights …[that]…granted by no other society”. At the tender age of eighteen, she established and founded the powerful Jama’at al-Sayyidat al-Muslimat (Muslim women’s Association). It became a powerful Islamic voice for Muslim women in Egypt. Al-Ghazali’s life was occupied with writing, teaching, and religious activities. She headed the group, managed all its activities, and fulfilled her role as a wife, mother, and household member.

At that time, Egypt, under the leadership of Gamal Abdel Nasser Hussein (1918-1970), championed the Arab Socialist Union (ASU), which was founded in the mid-1960s, and began campaigns against anything that posed a threat. The ideology of the ASU was inordinately hostile to Islam. As a result, Islamic values became a cultural heritage. Their influence was reduced to personal rituals or ceremonial events. Religious values and principles became foreign to Egyptian society. Nasserites made sure that Islam was marginalized and kept out of politics. Nasserites’ brutal crackdown on the Ikhwanul Muslimin (Muslim Brotherhood), founded by Shaykh Allama Hasan Al-Banna (1906-1949), was intended to set an example for others who may dream of ruling Egypt with the Shari’ah.

Nasser’s message was loud and clear. They were determined not to let Islam interfere with the country’s politics at any cost. Al-Ghazali, on the other hand, dreamt that Islam was about to rule Egyptian society and Islam was once again to be glorified, and the Qur’an and the Sunnah would be the country’s constitutions. She faced Gamal Abdel Nasser with an iron fist and challenged Nasserism: as a result, she was imprisoned. ‘Return of the Pharaoh’ is her memoir.

The title ‘Return of the Pharaoh’ has historical significance. The Pharaoh in the title refers to Gamal Abdel Nasser. The policies of Gamal Abdel Nasser toward Islam and its principles are likened to the policies of Pharaoh towards Musa’s (may Allah be please with him) call. The ‘Return of the Pharaoh’ is a representation of the suffering that Egyptians experienced under Nasser. This suffering is like the suffering Bani Israel (Children of Israel) experienced under the Pharaoh.

The memoir (2006. pp. XI) “is the story of a Muslim woman and the torture she was subjected to in the dungeons of Gamal Abdel Nasser…this story relates the efforts of dedicated Muslim women and her brothers and sisters in the cause, to make Islam, once again, a living reality, and how they were severely punished for that…”. It is a detailed account of how Muslims in general and leaders, in particular, such as Zainab Al-Ghazali (2006. pp. XII) “…suffered at the hands of Nasir (Nasser) and his secret police…”

The book is divided into seven major chapters, with sub-headings. Although the book is a detailed account of Al-Ghazali’s experiences in Nasser’s prison, it is also an account of the history of a movement, a religion, a society, and an ambition. The book relates the account of Al-Ghazali’s life before and after imprisonment. It recalls her meeting in detail with leaders of different parties, both religious and non-religious, for example, her relationship and meeting with the leader of the Ikhwanul Muslimin (Muslim Brotherhood), as she recalls (2006. pp. 25) “I met with Imam Shahid Hasan Al-Banna, for the first time, in those remote blessed days of 1937…six months after I formed the Muslim Ladies Group…”. And also her indirect correspondence with the Nasserite, in the form of letters and visits, Al-Ghazali notes (2006. pp. 84) “I looked at the letter [which was given to her by one of the police officers] and saw written at the top ‘the office of the president…”. It was a letter from the president ordering that (2006. pp. 84) “Zainab Al-Ghazali Al-Jubaili is to be tortured more harshly than men…”

The book details how she created the Jama’at al-Sayyidat al-Muslimat and how she became involved in Islamic activism and how she, at a later stage, joined the Ikhwanul Muslimeen. The book creates a detailed scene leading to her arrest. In the prison, she and another activist, who was a member of the Ikhwanul Muslimeen movement, were subjected to inhuman torture. She notes (2006. pp. 48) “I silently watched as members of the Ikhwanul Muslimeen were suspended in the air and their naked bodies ferociously flogged…some were left to the mercy of the savage dogs which tore at their bodies…” The book also recalls the detailed meeting, trials, and death of the late Sayyid Qutb, saying (2006) “ A few days later, we heard that the death sentence on Imam Shahid Sayyid Qutb…[along with] Shahid Abd al-Fattah Isma’il and Shahid Yusuf Hawash had been carried out…”. The book gives very clear and detailed information about the tortures that she and others were subjected to. It also allows the reader to picture and feel the environment and conditions of hate, enmity, and godlessness the Nasserite created. This is the condition that the Nasserite created in prison and beyond.

While reading the book, one can easily make a comparison between the Nasserites’ arrogance and stubbornness toward Islam and its principles with the arrogance and stubbornness of Pharaoh (Firaun) toward Musa and his call. The Memoir of Al-Ghazali represents her battle with the status quo of godless Egyptian society and the broader battle of good against evil: Musa’s (May peace and blessing be upon him) battle against Firaun.

In addition to having a beginning, middle, and end, the book follows a traditional novelist and diction style of writing. Time and space are vividly described, allowing the reader to experience the present and Al- Ghazali’s feelings. It also engages the reader with the dialogues, arguments, emotions, and feelings that are experienced by the prisoners who are in Nasir’s prison.

A Muslim woman is represented in the book as strong, confident, and enlighten by her faith in Allah (May He be exalted). Al-Ghazali was a threat to the Pharaoh, to the extent that she was mentioned by him (2006). Al-Ghazali’s memoir is a testimony and proof that faith in Allah is the greatest weapon a Muslim can possess, as she lived long enough to tell her story of the horrors she experienced in the Pharaoh’s prison.